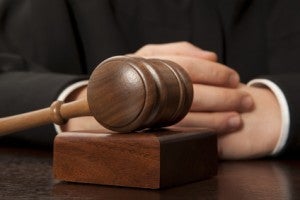 In an article entitled “Justice Compromised: Immigration Arrests at Washington State Courthouses”, published by the University of Washington's Center for Human Rights on October 16, 2019, https://jsis.washington.edu/humanrights/2019/10/16/ice-cbp-courthouse-arrests/, U.S. Immigration and Customs Enforcement (ICE) agents' espoused justifications for targeting courthouses in rounding up undocumented immigrants are both recounted and challenged. The article suggests that ICE has not been shy about making arrests at courthouses across the state of Washington, most frequently in Adams, Clark, Grant, and King Counties. The concern is that since 2017, immigration authorities have arrested literally hundreds of immigrants in or near courthouses in Washington, and reportedly these arrests were not limited to dangerous individuals. Many were victims of crime. Some had appeared in court on nonviolent charges, such as traffic offenses, with no prior criminal record. Others were at the courthouse merely to register motor vehicles, pay traffic tickets or accompany a relative to court.

As another blog which I recently authored on this topic notes (“Access to Justice Update – Oregon”), it is my firm belief from many years of trial practice that our civil and criminal justice system benefits from having all potential witnesses, defendants, victims, and other participants necessary to a just outcome in pending cases able to appear in court without fear of arrest – by ICE or otherwise.

The question arises, has there been any response by the State of Washington to this increased aggressiveness on the part of the federal government with respect to arresting undocumented immigrants at the courthouse? The answer is, yes, there has been effort at least, albeit there are no concrete results to date to show for it.

Specifically, in 2007 then State Supreme Court Chief Justice Mary Fairhurst wrote to acting Homeland Security Secretary John Kelly asking him to consider designating Washington State courthouses as "sensitive locations," more or less off-limits zones for federal agents. But he would not agree to do so. Rather, a letter last month from the current acting Homeland Security Secretary Chad Wolf and U.S. Attorney General William Barr to former Washington State Chief Justice Fairhurst and Oregon Chief Justice Martha Walters made clear that courthouse arrests by ICE will go on.

In the meantime, as my companion Oregon “Access to Justice” blog notes, the Oregon Supreme Court enacted a rule effective November 14, 2019, that prohibits civil arrests in state courthouses unless the arresting agency has a judicial arrest warrant. The Washington State Supreme Court reportedly is considering implementing a similar rule, but has not yet done so.

But Washington's Attorney General, Bob Ferguson, has tried to take action with regard to the matter. On behalf of the State of Washington, he filed a federal lawsuit on December 17, 2019 against the current administration, suing to stop such arrests, which his complaint alleges violate individuals' constitutional right to access to courthouses, and the rights of states as guaranteed by the 10th Amendment to operate their justice systems without federal interference. Mr. Ferguson's lawsuit is supported by King County Prosecutor Dan Satterberg and Thurston County Prosecutor John Tunheim, both of whom wrote declarations supporting the lawsuit. "No one is safer when crime victims fear being deported if they call 911, talk to police, or come to the courthouse to testify or get protection", Satterberg wrote. Tunheim's declaration includes this statement, "Specifically, undocumented domestic violence victims have expressed to their advocates that they no longer feel safe reporting abuse to the authorities for fear of deportation." What traction State Attorney General Ferguson's lawsuit will manage to gain, and whether it has any chance at changing the federal government's current policies and practices, has yet to be seen.

We should remember as a nation that courts cannot function effectively unless not only the parties to an action, but also all witnesses and victims, whether they be U.S. citizens or undocumented persons, are willing to come to court to testify. That by enhancing the opportunity for equal access to justice for immigrants we actually increase the likelihood that justice may be fairly achieved for all persons with any business in Washington courts.

In Washington, however, the watchword for now on this issue can only be said to be, “stay tuned”.