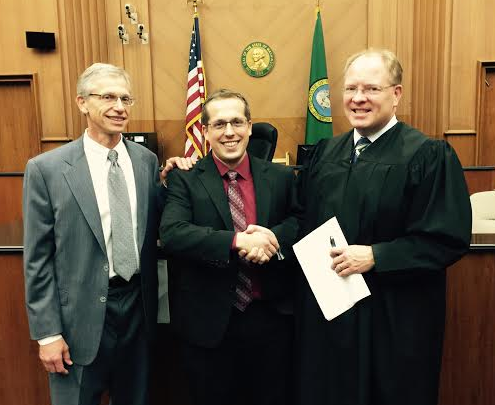 William Thayer, Bradley Thayer, and Judge Gregerson of Clark County Superior Court, at the swearing in of Bradley as an attorney in Washington State.

On October 7, 2015, Bradley James Thayer was sworn in as a Washington attorney by Judge Gregerson of Clark County Superior Court.  Brad Thayer is one of many attorneys in his family.  His father is William K. Thayer of our Schauermann Thayer Jacobs Staples & Edwards PS law firm.  His uncle Steve Thayer and his cousin Jacy Thayer are both lawyers here in Vancouver, Washington, as well.  Moving up the lineage, Brad's grandfather Wilbur Brewer Thayer, and his great grandfather, Wilbur Fenno Thayer, Jr., were also well-respected lawyers in their own times.  After trying his hand at various odd jobs including a stint living abroad and teaching English to Spanish speakers for two years, Brad worked hard in law school and showed great academic capability.

As the big day for Brad's swearing in approached his father, Bill, authored the following piece, as an open letter to the new inductees to the Washington State Bar:

On taking an oath as a lawyer

To the new inductees to the Washington State Bar, congratulations!

The path to being sworn in as a lawyer is not an easy one.  To traverse it requires courage, discipline, hard work, and sacrifice.  Years of study, hours and hours each day, at no small financial and emotional cost.  At the end an examination designed to fail almost as many as are allowed to pass.  It is unusual to find a product of this gristmill that has not lost a relationship with someone they cared about along the way, or at least their 20-20 vision, if not both.  But I am here to tell you it is worth it.

In having practiced law now for 35 years, I have gained a high degree of appreciation for what lawyers in various types of legal employment do.  They prosecute those who commit crimes and those whose acts transgress necessary societal boundaries, and they just as emphatically defend those who are unfairly accused or who are being over-harshly prosecuted.  They advise businessmen and draft contracts.  They interpret tax laws and apply for patents and copyrights.  They advocate for one side or the other in the tense struggle for civil justice in matters of negligence and wrongful death, products liability, and real estate boundary disputes.  They help injured workers and disabled veterans and indigent and homeless persons who have great need for someone on their side in matters of critical economic and even essential human survival.  And they sit as judges and appellate scholars and hearing officers in tribunals around our state and country, making unpopular but necessary decisions and compromises by the hundreds of thousands each year that are important to the successful functioning of a free and democratic society.

Will being an attorney be an interesting line of work?  It certainly has for me in my practice doing personal injury work.  Depending on what you do, as a lawyer the course and scope of your practice too will likely cross the paths of many different walks of life.  In representing carpenters you learn something of the carpentry business, in representing landscapers you learn about landscaping, accountants about bookkeeping, inventors about inventing, and on and on and on.

Being a lawyer can be a grand profession or a base profession, depending upon what you choose to do and how you opt to conduct yourself.  But let me just suggest this – if you make the focus of what you do a type of law that keeps you involved with helping people, to make their lives better in one way or another, and if in the course of your practice you are honest and diligent, then as you approach the end of your career you will feel that your work has been important, and indeed, noble.

So I say to you now, as you finally are allowed this opportunity to take the oath and from thence forward be called a lawyer, this is truly a great moment.  Do not underestimate what you have accomplished and what you now possess in the way of knowledge and capabilities, just as you must not be vain or overly confident as you press forward with your career.  Appreciate the professional license that you are now receiving, and always do your best to enjoy and respect it.  With it and because of it you can, and no doubt will, do great things for many people.