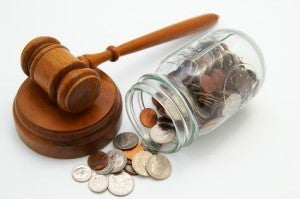 Who pays for legal fees? This complex case resulted in an important win for one of our clients

If you were struck by a motorist and a court found the motorist culpable, what sort of insurance pays the bill, and does it cover your legal fees?  The answer depends on a lot of things including the state in which parties are insured, type of insurance, the nature of insurance carriers, and insurance waivers.  And, sometimes there's more to a personal injury law case than just winning the initial compensation.

Take for example, our case of Weismann v. Safeco Ins. Co.  One of our firm's attorneys, Craig Schauermann, handled the initial claim of Karen Weismann against the at-fault driver; Craig and Scott Staples handled the subsequent lawsuit against the insurance company that paid the PIP benefits to recover legal fees related to the case, which they ultimately argued before the Supreme Court of Washington State.

Accident brief:  Weismann was operating her motorized wheelchair when she was struck by motorist Darlene Kangas. Kangas was insured by Safeco. As a struck pedestrian, under the law and the terms of the insurance policy, Weismann was an insured under Kangas's PIP policy and received $9,012.95 in PIP benefits for medical expenses.  Weismann later settled her claim against Kangas for the medical bills plus an amount for general damages, i.e., pain and suffering.  When Safeco, acting in its role as PIP insurer, refused to reduce its right or reimbursement to account for its proportionate share of Weismann's attorney fees and costs incurred in obtaining the liability settlement, Weismann sued Safeco.

About PIP Coverage:  Personal Injury Protection (PIP) is a part of an auto insurance policy available in some states that covers medical expenses and, in some cases, lost wages and other damages. PIP is sometimes referred to as “no-fault” coverage, because the statutes enacting it are generally known as no-fault laws, and PIP is designed to be paid without regard to “fault,” or more properly, legal liability. If a person has PIP coverage they can use it for covered expenses even if they were responsible for causing the collision (our client was not responsible in this case, however, for causing the crash).  Insurers must provide PIP coverage in Washington, unless the insured signs a waiver stating that they don't want the coverage.

Now that you have an overview of the initial collision, and an overview of what PIP coverage is about, let's consider what happened next.  When Weismann settled her personal injury claim against the driver, Safeco attempted to offset (reduce) the liability settlement by the full amount of PIP benefits Weismann had already received, without a reducing its offset by its  share of Weismann's attorney fees and costs.  The law in Washington was clear that when a PIP insured recovers those same benefits in a liability settlement the PIP carrier needs to be paid back, but it has to reduce the amount it was entitled to so that it pays its fair share of the insured's attorney fees and costs spent in getting that money back for the insurer.  Safeco argued it didn't have to do this and could, in its role as PIP carrier, get a full reimbursement by reducing the liability payments made under the other part of the policy by the full amount of the PIP benefits, without reducing the offset to account for those fees and costs.  Essentially, Safeco argued that the PIP benefits were simply paid as an advance on the liability settlement and were not separate benefits Weismann was entitled to as a PIP insured.  The trial court agreed with our arguments and decided in our favor, ruling that Safeco had to reduce its offset, and netting our client an additional $3,000+.  Safeco appealed, and Division 2 of our Court of Appeals decided in favor of Safeco.  We appealed that ruling to the State Supreme Court.  The case became more complex when another similar case against State Farm was joined with our case before at the State Supreme Court level.

The bottom line is that our lawyers felt our client was due fair compensation for fees incurred in obtaining her settlement, while the insurance company decided that these payouts were against their best interests, resisting such payouts with every legal argument they could muster.  They lost.

“What the decision on PIP insurance from Weismann does is eliminate any mystery surrounding what an insurance company's obligations are towards a PIP insured who has the coverage under the striking driver's policy.  We go into cases now knowing that we will be able to get a reduction in the reimbursement to PIP, which will help our client obtain a greater recovery and have the client treated fairly as a PIP insured.” explains Scott Staples.

The final court reasoning is presented by Washington State Assn. for Justice (WSAJ) at WashingtonJustice.org, who filed a brief supporting our position during the case, in a synopsis at their site:  “The Court rejects the insurers' arguments and disapproves of Young (a prior, contrary case) as being contrary to the reasoning of Winters and Hamm (two bedrock Washington cases in this area). The different coverages must be analyzed separately, and, in this light, proportional fees and costs must be paid because the offset benefits the insurer in its capacity as PIP carrier. This is necessary to ensure full compensation for the injured passenger and pedestrian, and to avoid disadvantaging them solely because both PIP and liability coverages are provided by the same insurer.”

Due to the intricacies and differences of each and every case, we can't say what courts will decide during future litigation — but we can tell you that we will always fight for what is right and fair for our clients including how payment for legal expenses is determined.