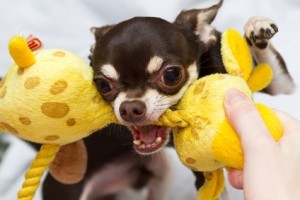 Even little dogs can pack a powerful bite, as one of our Attorneys found out.

In an interesting turn of events, I was recently able to see, firsthand, how serious and painful a dog bite can be. Even when inflicted by just a little dog. As I was watching the conclusion of one of the Blazer games on TV at home not too long ago, I got a call from a helper of my dear mother. She told me that Mom had been bitten by one of her dogs, when she tried to stop it from stealing its “sister's” bowl of food. I assumed, because the little guy is just a small Havanese-mix breed of dog, that the bite couldn't have been too bad. However, Mom had gone on a blood thinner recently, so I understood it when told that she was on her way to the hospital to try to get assistance with getting bleeding under control.

“It wasn't until her temporary bandages were taken off that I finally saw just how bad the bites actually were. One in particular on her left hand was about an inch and a half long and down to the bone.”

I hung up the phone and drove over and met them at PeaceHealth hospital. I thanked her and suggested Mom's helper, who had had a long day, go home and get some rest. Mother and I then proceeded to wait together in the emergency room over the next two hours, until about midnight, for her turn to be seen. She sat there, like a trooper, patiently keeping one of her bandaged hands raised in the air.

After we were taken back into a room, it took another two hours as the attentions of the nurse and doctor assigned to us were divided between other more life-threatening emergencies coming into the hospital, and cleaning and dressing Mom's wounds.

It wasn't until her temporary bandages were taken off that I finally saw just how bad the bites actually were. One in particular on her left hand was about an inch and a half long and down to the bone. It bled profusely when the temporary dressings were removed.

A very capable nurse repeatedly flushed Mom's three separate wounds with saline solution and administered a tetanus shot. The bite on Mom's right hand was able to be closed up with just a butterfly bandage. But the bite on her left hand required four stitches. When she could finally get around to focusing on Mom's bites, in between dealing with other more urgent patient concerns, the emergency room doctor did an excellent job of injecting local anesthetic around the wound and putting in the sutures.

At discharge, we were informed that the biggest concern, now that the bleeding was under control, was infection. While dog bites aren't the worst (apparently human bites are, with cat bites next worst), there is a high risk of infection from any animal bite. We left with a prescription for a strong antibiotic.

I got Mom back to her house and off to bed finally by about 2:30 in the morning. Before they had called me, she and her helper had tried to staunch her bleeding for over 3 hours without any professional medical help. With going to the emergency department as the only late evening urgent care option, and that being an often unpleasant and very expensive means for obtaining professional medical help, it made sense to me that they had tried to stop the bleeding on their own before deciding to go to the hospital. But once I finally saw how deep and long the left-hand wound was, it was clear to me that, with or without the blood thinner issue, the trip to the emergency room had been the right call.

As it turns out, Mom apparently had lost quite a bit of blood before she was patched up. She was very dizzy and unstable when she woke up the next morning. Thankfully, her recovery has been good since that night.

In my 34 years of law practice, I've handled quite a few dog bite cases. I grew up around animals and I've been bitten by dogs myself, too, over the years, but fortunately never very seriously. In any event, I drew several conclusions from this recent experience of my mother's. Here are my “takeaways”:

I have explained to my mother that, especially now that this has happened, she needs to put her dogs in their pens whenever someone visits her home. While her little dogs are cute and cuddly, there is a risk to any visitors who pet or hold them. Whenever their usual routine is disrupted by the presence in their home of persons and pets that aren't a part of their daily experience, our pets' behavior just can't be well-predicted. And as the past blogs on this website have emphasized, in the state of Washington, any owner whose dog bites someone will be automatically held to be fully responsible for their dog's bite. Not only can the injury, medical bills, and damages be significant, as Mom herself learned the other night, but there is also a risk that the beloved family pet may have to be quarantined, or worse yet, euthanized.

So goes another chapter in the book of life's lessons. If you are a dog owner, it is probably best to try to avoid putting your pet at risk of being stressed by unfamiliar faces and circumstances. On the flip side, if you're visiting someone who has pets, think about going slowly if you want to try to get to know them.