A Whole Lot of Shakin’ Going On! 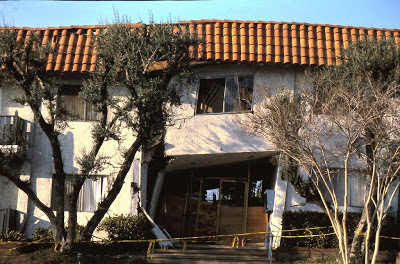 It was 20 years ago, January 17, 1994, at 4:31 AM. I awakened to the sound of my wife yelling, “Break his door down, if you have to!” (addressed to our son down the hall, referencing his younger brother in the next room). I also had a sensation of violent motion, akin to what a pair of sneakers would feel in a tumble dryer. About that time there was the sound of the grandfather clock falling against our bedroom door, and other background sounds of things breaking.

It was the magnitude 6.7 Northridge Earthquake, epicentered three miles from us.

We gathered ourselves together and exited the house through the bedroom glass slider to the patio. It was a brilliantly-clear pre-dawn; warm for mid-January, with a mild “Santa Ana” wind (the warm, dry wind that flows from the desert through passes and canyons into the Los Angeles coastal area in winter months) in progress. But the patio was wet — from water that had sloshed out of the swimming pool. And the ground was still shaking.

It was the most spectacular night sky we'd ever seen in Los Angeles, because all city lights had been knocked out in the quake. We could see a small brush fire on the brushy hill north of us (likely a downed power line), and a glow in the northeast, from the gas main explosion on Balboa Boulevard in Granada Hills that took out an entire block of homes. It was bizarre. It seemed like Armageddon.

We greeted the sunrise with neighbors on our front lawns and in the street, making sure everyone was okay and waiting for enough daylight to go back into our homes to see what was left.

We were relatively fortunate. Structural damage was limited to the brick chimney and slumpstone property-line walls, all of which had to be replaced. Lots of knick-knacks in the house were broken. Because of the lateral motion of the quake, things that were on east or west walls fell, and things on north-south walls generally stayed put.

Some neighbors were not so fortunate. In the house immediately behind ours, the same design and floor plan as ours, the roof collapsed.

The swimming pool was our seismometer — when water shloshed out onto the deck in an aftershock, we knew it was magnitude 5.0 or better. Scientists interviewed on TV beamed like kids with a new toy: “Wow, we sure learned a lot from this one — we didn't even know that fault was there! For all we know this might just be a foreshock of an even bigger one!!” (Thanks for sharing.) Our next-door neighbor, a retired jet fighter pilot, spent the next two weeks standing on the sidewalk in front of his house with a highball in his hand, reluctant to go back inside. “I'd rather be shot at in combat,” he said.

Electric power in our neighborhood was out for 24 hours. Landline phones were down. Not until afternoon of the first day were we able to get through on my suitcase-sized cell phone to let out-of-town relatives know we were okay. There was no water for a week. I learned it took four one-gallon milk jugs full of water from the swimming pool for each toilet flush. We had to boil water for two weeks thereafter.

Material things eventually got fixed or replaced, and we moved to the Northwest a year and a half later (a decision that had been made before the quake). So now we live 35 miles from an active volcano. But there are emotional effects of that morning that will never go away.

A more positive take-away from the earthquake, however, is the lesson of being prepared. Even in the Northwest, natural disasters can and do happen. There are wind storms, ice storms and forest fires. Tornadoes have visited Clark County. Scientists warn that a major earthquake in the Portland Metro area is a real possibility. As one nears the coast, signs remind of the danger of tsunami. And, indeed, there are volcanoes. We can't stop disasters from happening, but we can take steps to be as prepared as possible.

Many of those steps are simple, even obvious. Have a supply of fresh water and non-perishable food. Get a first-aid kit. Keep a flashlight handy. Keep a pair of slippers near your bed. (Why? In the Northridge quake, many people were badly injured by walking barefoot on broken glass in the pre-dawn darkness.)

Don't assume that cell phone service or the internet will be available after a major disaster. This is where a good, old-fashioned, battery-powered AM radio can come in handy — it might be your only source of information on what is going on around you (and don't forget fresh batteries!).

Have a plan for where you and your family can meet if you become separated in a disaster when communication is impossible.

Check these websites for excellent suggestions for home preparedness kits and planning:

Finally, are you covered by insurance for a disaster? Whether you own or rent your home, check with your insurance agent to find out what is covered in your homeowner's or renter's policy. What kinds of disasters are covered? You might be covered for fire but not for flood or earthquake, without paying for additional coverage. Some events, such as war, riot and insurrection, might not be insurable at all. Find out about deductibles in your policy — how much damage must there be before the insurance company becomes obligated to pay.

Natural disasters are almost always a surprise, and are often costly, physically, emotionally and financially. But with reasonable preparation and planning, you can help to keep the costs as low as possible.