I-84, Other Oregon Highways to See Speeds Rise 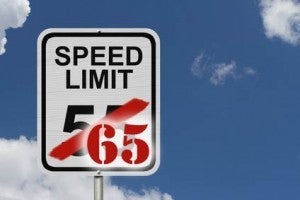 On Tuesday, March 1, 2016, a law goes into effect that will see speed limits rise on most of I-84 as well as on many rural highways in Oregon.

The Portland metro area and the I-5 corridor will not be affected as a result of the impending changes.

Here at Schauermann Thayer, we aim to inform with an eye toward making our community safer. As you know, when cars are moving at higher speeds this reduces drivers' time to react. This makes a collision more likely to occur. Further, Ken Kolosh, the head of the nonprofit National Safety Council's statistics department, told The Oregonian/OregonLive, “Even with safer automobiles, the increased speed does increase the severity of crashes when crashes do occur.  The roads with higher speed limits are most at risk for fatal crashes. It's really just a question of physics.”

Our take? It's called a speed limit – the name itself suggests that drivers are perfectly within their rights not to push the limit. Drive at a speed (under the limit) that feels comfortable and safe for you.