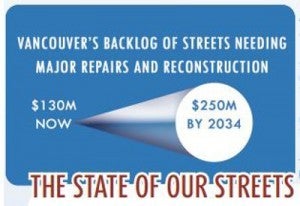 As reported in a recent article in The Columbian titled, Vancouver takes aim at fixing roads, the city of Vancouver's Commission on Street Funding has come up with a plan to generate the money needed for street maintenance, repairs, replacement and capital projects.

In any population center, the quality of streets and roads have a significant impact on the people that live there. Broken pavements and sidewalks and faulty street lighting  put pedestrians at risk while functional signals and road markings are necessary for traffic calming and safety.

In the city of Vancouver, the state of the streets has been the subject of much debate and attention. Quite simply, pavement standards are deteriorating and there is a limited budget for the most basic of community needs such as:

Unfortunately, the more the conditions are allowed to deteriorate the more expensive it becomes to bring them back to an acceptable standard. The City of Vancouver council advise that it costs $2 to 5 per square yard to maintain a street that is in great condition. That sum rises to $10 to 25 per square yard if the street is in good condition and skyrockets to $40 to 75 per square yard to reconstruct streets that have gone beyond the point of saving.

There is a $130 million backlog of streets that currently need repair or reconstruction. If nothing is done, this alarming black hole will rise to $250 million by 2034 – and remember this is the budget required simply to maintain standards – not to introduce the latest in street lighting technology and top end paving construction materials.

Money to fund the city's street program must be found somewhere. Wherever it comes from is going to have an impact on all the city residents, so the City of Vancouver set up a number of initiatives to elicit public comment. The outreach program included an  open house at which the Streets Funding Commission presented a report which included the following key points:

Drawing on both government and public input the following street funding measures were decided upon:

Vehicle license: New $20 fee in 2016, raised to $40 in 2018,
Business license: $10/employee increase ($60) in 2016, raised to $20/employee increase ($70) in 2018 (capped at 400 employees/$12,000 annual gross threshold,
Utilities tax: 1.5% increase on city-owned utilities (paid by all water/sewage/drainage/garbage customers in City, and water/sewer customers outside of City; currently at 20%),
New gas tax: Share of gas tax increase from WA Legislature,
Paid-off debt: City revenues used to pay loans for previous projects to be dedicated to street.

Collectively, these new funding sources will provide the money to pay for improved and expanded safety, bicycle and pedestrian facilities; neighborhood traffic calming measures throughout the City of Vancouver; the raising of pavement standards city-wide from fair to good by 2034 and the replacement of outdated and worn out signals and other street system assets.

Some City of Vancouver residents may find the increases in licence fees and utility taxes a little hard to swallow but others will see them as a bitter but necessary pill. The Columbian article mentioned above highlights that the measures were not arrived at lightly. Tim Schauer, board chair of the Columbia River Economic Development Council is quoted as saying, “There wasn't a precooked solution. We spent quite a bit of time debating. There is a great sense of urgency. … We believe the city is at a tipping point.”

Certainly, as Mayor Tom Levitt says, the poor state of the roads in the City of Vancouver are obvious to any visitors to the community. As he says, “If we aren't willing to invest in ourselves, why would others want to invest here?”

City of Vancouver . Scenarios for our Streets