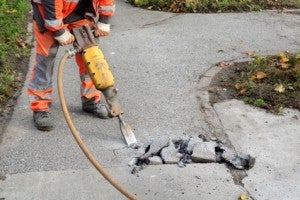 Who's legally responsible for sidewalk repairs? Hint: it's not just the city in all cases.

When a public sidewalk that sits between a public street and a private home becomes uneven, or in a state of disrepair to the point where it causes a fall and injury, who is legally responsible?  That question was recently posed to us by a former client.

We've all seen a sidewalk that is uneven due to cracking, settling/raising between sections due to tree roots or other causes, etc.  Sometimes the more subtle defects are the most dangerous, because they're large enough to trip a pedestrian but not large enough to be easily noticed.  Some folks try and draw attention to these issues by spray painting the dangerous area, but it seems most of the time the condition goes unmarked and unrepaired until someone gets hurt.

So, what exactly does it mean for the property owner to “cause or contribute” to the dangerous condition? That's probably going to be decided on a case by case basis, but one of our courts of appeal has given an indication of what might qualify. In 2009, Division 1 of the Washington Court of Appeals held that if an abutting landowner plants trees, the landowner has a duty to exercise reasonable care to see that the roots of those trees planted adjacent to the public sidewalk do not pose an unreasonable risk of harm to a pedestrian using the sidewalk.”

The Supreme Court of the State of Washington has ruled that cities (and by extension, other governmental entities such as counties) are legally responsible for the physical condition of public sidewalks, and the abutting property owner is not legally responsible for the physical condition of the sidewalk unless that property owner causes or contributes to the dangerous condition.  See discussion in Rivett v. City of Tacoma, 123 Wn.2d 573 (1994).

This type of ordinance was in effect in the Rivett case, enacted by the City of Tacoma.  The court ruled that the part of the local law that required the abutting property owner, as the person in the best position to know of the danger, to notify the city of dangerous conditions in the sidewalk and provide a statement that the owner did not cause the condition, was legal and could be enforced.  In fact, the court said the city could impose fines on the owner for failing to comply with this “notification” part of the code.  But the court ruled that the law's requirement that the property owner indemnify the city for damages that occurred, regardless of whether the property owner actually contributed to or caused the dangerous condition, was unduly oppressive, and therefore unconstitutional.

So, what exactly does it mean for the property owner to “cause or contribute” to the dangerous condition?  That's probably going to be decided on a case by case basis, but one of our courts of appeal has given an indication of what might qualify.  In 2009, Division 1 of the Washington Court of Appeals held that if an abutting landowner plants trees, the landowner has a duty to exercise reasonable care to see that the roots of those trees planted adjacent to the public sidewalk do not pose an unreasonable risk of harm to a pedestrian using the sidewalk.  Rosengren v. City of Seattle, 149 Wn. App. 565.  The court held that this duty on the landowner did not relieve the city of its duty, as owner of the sidewalk, to maintain the sidewalk in a manner that did not pose a risk of injury to pedestrians, which was a duty distinct from the one imposed on the landowner to “restrain the tree so as not to injure the pedestrian.”

This isn't a Supreme Court case, but the Supreme Court also hasn't said that this wouldn't be their decision if they were asked the specific question.  It seems reasonable to conclude that the state of the law is that juries would be allowed to decide whether the landowner failed to restrain their tree roots, at least for trees they planted, and whether that was a cause of the injury.

Locally, Clark County has enacted Code Sec. 12.26.010.  This section requires that abutting property owners keep public sidewalks “in good order and repair.”  The section states that owners shall be liable to the county for all losses the county incurs for damages to persons injured caused by the property owner's failure to repair and keep in good order and reasonably safe condition all such sidewalks.  The county has the ability to notify the property owner that repairs are necessary and require the owner make the repairs.  If the owner doesn't, the county can make them and charge the owner for the costs of repair.

Given the two cases referenced above, it may be questionable whether the indemnification provision contained in the section would be legally enforceable, at least with regards to conditions the landowner did not actually cause.  It's not clear whether this section of Clark County's code has ever been challenged in court.

City of Vancouver Municipal Code Sec. 11.30.030 says that it is a code violation for an abutting property owner or lessee to allow any sidewalk to “be or remain in a defective, dangerous, dirty, slippery, or obstructed condition.”  This includes permitting the accumulation of snow, ice, or volcanic dust or debris (just in case Mt. St. Helens blows again).  Under Sec. 11.30.050, the city can order the owner to remedy the condition.  The Vancouver code does not appear to have an indemnification provision.

In summary, an abutting landowner who plays some role in causing the unsafe condition of a sidewalk (say, by planting trees near the sidewalk) runs the risk of being found liable if someone is injured because the roots of those trees cause the sidewalk to raise up.  The city or county runs the risk of being found liable for failure to repair a dangerous sidewalk condition, regardless of who caused it.