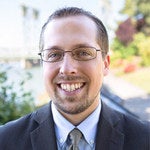 Brad Thayer joined the firm in 2015 and became a partner in 2018. He was presented the 2018 Rising Star Award by the Clark County Bar Association.  He earned a Bachelor's degree in Journalism with a minor in Sociology from Western Washington University and a Juris Doctorate, Cum Laude, from Willamette University College of Law. His practice focuses on personal injury, auto accident, biking accident, and insurance cases. Brad speaks Spanish at an intermediate level. He has studied it at various levels over the years in school and lived in Spain from 2009 to 2011 teaching English. In his free time, Brad enjoys following the Portland Trail Blazers, playing basketball, going to concerts, and playing the drums. He especially enjoys hiking in the Columbia River Gorge and around other Northwest wonders.