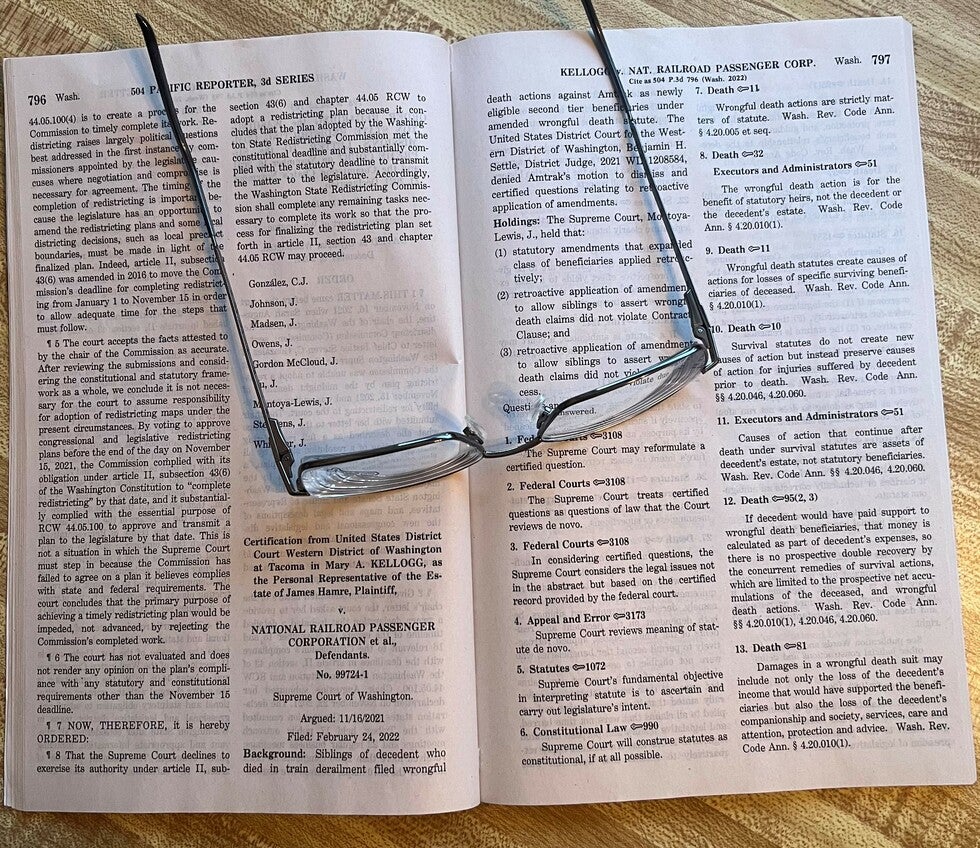 This week's case review looks at a fairly recent Washington State Supreme Court decision related to who should qualify as the beneficiary in a Washington wrongful death action. Specifically, the case of Kellogg v. Nat. Railroad Passenger Corp., 504 P.3rd 796 (February 24, 2022).

James Hamre died when an Amtrak passenger train derailed in DuPont, Washington, in 2017. Mr. Hamre was survived by his mother, who had lived with him, and three adult siblings. The mother's action was promptly settled, but under the law then in effect, Mr. Hamre's three siblings had no right to any remedy.

After one of Mr. Hamre's brothers had been appointed as personal representative of his estate, and the 2019 wrongful death law amendments had taken effect, an action proceeded in federal court seeking a remedy for all three siblings. Amtrak challenged the action, claiming that because Mr. Hamre's siblings were not dependent upon him at the time of his death they did not qualify as wrongful death beneficiaries under Washington's wrongful death laws then in effect. The federal court referred the issue for decision to the Washington State Supreme Court, as is often done by federal courts when interpretation of a state's specific law is at issue.

This was the structure of the law both before and after the 2019 statutory amendments. However, under the previous version of the statute, the parents, brothers or sisters would have to prove that they were dependent upon the deceased person for support, and resident within the United States at the time of the deceased's death, in order to qualify as beneficiaries eligible for recovery.

Again, by its 2019 amendments to the wrongful death law, the legislature modified the beneficiary statute to remove the requirement that the second-tier beneficiaries be both dependent on the decedent and residents of the United States.

Thus, with respect to second-tier beneficiaries, the statute now reads: “If there is no spouse, state registered domestic partner, or such child or children, such action may be maintained for the benefit of the parents or siblings of the deceased.” RCW 4.20.020.

In any event, what was specifically at issue in the Kellogg case was simply whether or not the 2019 changes in the law could be applied retroactively such that Mr. Hamre's three brothers, who were not dependent on James at the time of his death, would qualify as beneficiaries under the law and be eligible for wrongful death remedies.

The Washington State Supreme Court concluded that, in amending the law it was the Washington legislature‘s intent to have it be applied retroactively, and that applying the statutory changes at issue would not run afoul of any constitutional, contractual, or due process rights. This Washington State Supreme Court decision thus cleared the way for James Hamre's personal representative on behalf of all three siblings to be able to go ahead and pursue their wrongful death action against Amtrak in federal court.