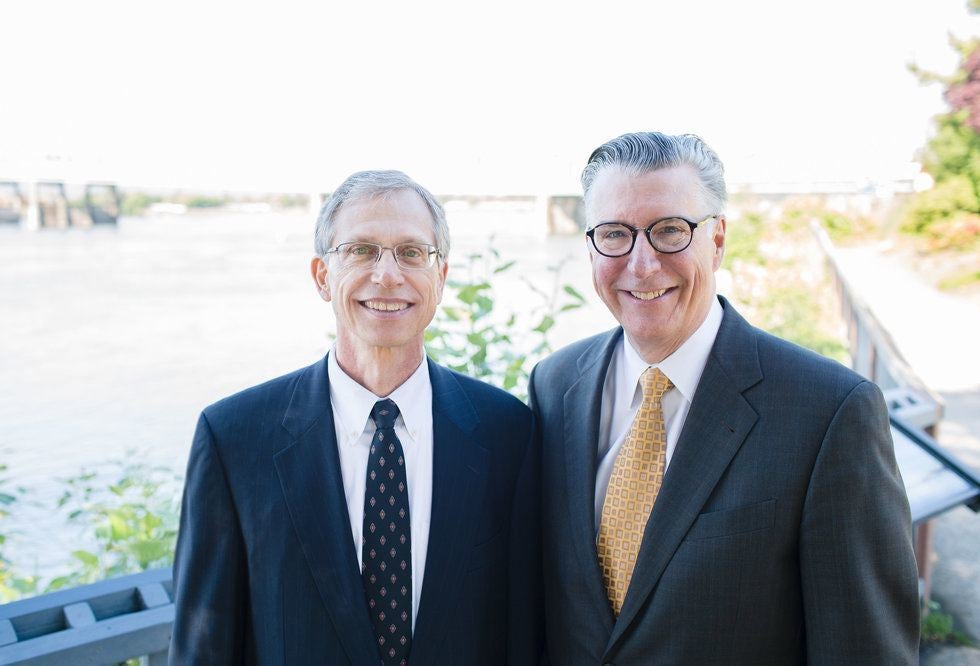 The firm is proud to announce that on Saturday March 3, 2018, attorney Craig Schauermann of Schauermann Thayer was awarded the LIFETIME ACHIEVEMENT AWARD by his peers in the Clark County Bar Association at its annual “Barrister's Ball”.  What follows are excerpts from the introductory speech given by Craig's longtime friend and business partner, Bill Thayer:

I am honored to be here tonight to introduce my good friend, mentor, and business partner, Craig Schauermann.

Craig passed the Washington State Bar in 1977.  After working his first 2 years at a firm in Seattle, Craig began his professional career here in Vancouver in 1979, at Darrell Lee's Hazel Dell law office.  In 1979, there were just 4 Superior Court judges, no court commissioners, and only about 80 active attorneys in Clark County.  Back then, no trials were done in the summer.  There were just 8 attorneys in the prosecutor's office.  Legal research was done out of law books.  There was no internet and no list serves, so mentors were our partners and an occasional friend in the bar…

Early in his practice, Craig represented clients with a broad variety of civil law issues.  Ultimately, personal injury, insurance law, wrongful death cases became the focus of his practice.  He is a well-seasoned warrior of litigation and appeals.  By rough count, he has tried some 40 civil jury trials, one of which was a toxic tort chemical exposure injury case in federal court in Spokane that lasted for 55 trial days and resulted in verdicts for Craig's four clients totaling 7.6 million dollars.  He has arbitrated over a hundred cases, most notably achieving one of the highest arbitration personal injury case damage amounts in the state at the time it was awarded, 38.5 million dollars before reduction for comparative fault.  He has successfully argued cases before the Court of Appeals of the State of Washington and in the 9th Circuit Federal Court of Appeals.  Two of the appellate cases he worked on changed the law of our state for the better for injured tort victims (the Matysuk/Weissman case), and for workers seeking unemployment benefits (Ciskie v. Employment Security Department).

In the early eighties, Craig was elected as secretary of the Clark County Bar Association (CCBA), and was instrumental in starting the first local CCBA-sponsored seminars.  There was no way for attorneys to get required credits locally until then.  Online attendance options of course didn't exist, so everybody had to drive clear to Seattle or Yakima for any CLE (continuing legal education) credits.  The concept of local CLEs was a big hit then, and it still is today.

Craig and I founded our Schauermann Thayer law firm together in 1986.  That same year, Barbara Johnson was elected Vice President of the bar.  When she was appointed to the bench and thus couldn't continue as CCBA's vice president, Craig was elevated to be the CCBA vice president in her place.  He then served as the President of the CCBA for the 1987-88 term.

Craig has been generous with his time over the years as a volunteer on a state-wide level as well.  He was appointed to the Washington State Bar's CLE Committee in 1988, and became its chairperson the following year.

He was a frequent Trial Lawyer volunteer at “Lobby Day”, meeting with state senators and representatives in Olympia, advocating for changes in the law to help tort victims have improved opportunities for civil justice.

Between 2000 and 2010 Craig coached the Hudson Bay High School Mock Trial team, taking it to State 7 out of 10 years, giving many young people a positive interest in our court system and the legal profession.

On June 30, 2015, Craig cut back on his professional obligations, becoming “of Counsel” with our firm, and spending more time with his lovely wife Norma and their family and grandchildren.  On a part-time basis, he still provides mentoring and strategizes on cases with the attorneys of our office and serves as an arbitrator, mediator, expert witness, Settlement Guardian ad Litem, and case consultant in insurance and complex injury cases for other attorneys and firms in town, when asked.

In short, Craig has had a long and storied career – representing several thousand clients with the utmost of professionalism and skill, and doing great things for our community, locally and statewide.

From observing him over the years, he is a role model as a husband, father, and grandfather.  He is a gifted lawyer.  And as a person, a partner, and a friend, I can honestly say that Craig is the best of the best.  It is truly a great honor for me to be able to present him tonight as the recipient of the Clark County Bar Association's Lifetime Achievement Award.