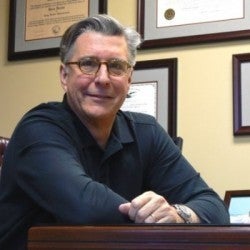 At this year's annual Clark County Bar Association (CCBA) barbeque, the local bar association will be honoring its members who have been in practice for over 40 years.  Craig Schauermann will be among those recognized at this upcoming event for local lawyers to be held on July 26, 2019.

Craig Schauermann was one of the founders of the law firm that has since become Schauermann Thayer Jacobs Staples & Edwards PS (we frequently still abbreviate the firm name to “Schauermann Thayer”).  Craig and I started the firm together in 1986.  But Craig actually started practicing law almost a decade before that, so there is no doubt that now he can officially be called an “old-timer” in the legal profession!

Let's look back for a moment.  Craig passed the Washington State Bar in 1977.  After working his first 2 years at a firm in Seattle, Craig began his professional career as a lawyer here in Vancouver in 1979, at a Hazel Dell law firm.  Early in his practice, Craig represented clients with a broad variety of civil law issues.  Ultimately, personal injury, insurance law, and wrongful death cases became the focus of his practice.  He is a well-seasoned warrior of litigation and appeals.  Craig has tried some 40 civil jury trials, one of which was a toxic tort chemical exposure injury case in federal court in Spokane that lasted for 55 trial days and resulted in verdicts for Craig's four clients totaling 7.6 million dollars.  He has arbitrated over a hundred cases, most notably achieving one of the highest arbitration personal injury case damage amounts in the state at the time it was awarded, 38.5 million dollars before reduction for comparative fault.

In the course of his four plus decades of practice Craig successfully argued cases before the Court of Appeals of the State of Washington and in the 9th Circuit Federal Court of Appeals.  Two of his Washington appellate victories changed the law of our state for the better for injured tort victims (Matsyuk/Weissmann v. State Farm/Safeco), and for workers seeking unemployment benefits (Ciskie v. Department of Employment Security).

In the early eighties, Craig was elected as secretary of the CCBA (the entity that will be honoring him at the upcoming July barbeque), in 1986 he became the CCBA vice president, and ultimately he served as its president, from 1987 to 1988.

Craig was generous with his time over the years as a volunteer on a state-wide level as well.  He was appointed to the State Bar's Continuing Legal Education Committee in 1988, and served as its Chairman the following year.  He started doing work with what has become the Washington Association for Justice (WSAJ) in the early 1990's – speaking at seminars and organizing local round table meetings for trial lawyers.  He was appointed to the organization's Board of Governors in 1997, served in that capacity until 2001, and then served for another 10 years on  its PAC Board (WSAJ's Justice for All Political Action Committee).  He was a frequent trial lawyer volunteer at “Lobby Day”, meeting with state senators and representatives in Olympia, advocating for changes in the law to help tort victims have an opportunity for civil justice.

At home, from 2000 to 2010 Craig coached the Hudson Bay High School Mock Trial team, taking it to State 7 out of 10 years, instilling in a number of young people a keen interest in our court system and the legal profession.

In summary, Craig's professional career as a trial attorney to date – of some 42 plus years – has been a meaningful one.  He represented several thousand clients with the utmost of professionalism and skill, but still somehow managed to take the time to do great things for our community, locally and statewide.

Mr. Schauermann remains of counsel with Schauermann Thayer, continuing to work on a part time basis collaborating and strategizing with the firm's five active attorneys – Bill Thayer, Scott Staples, Scott Edwards, Brad Thayer, and Ben Melnick – regarding their respective wrongful death and personal injury cases.  Craig also serves as a case consultant and expert witness in insurance, complex injury litigation, and attorney fee dispute matters for other attorneys and law firms in town, and is frequently appointed by outside colleagues to serve as an arbitrator or mediator in their injury, wrongful death, and insurance cases.