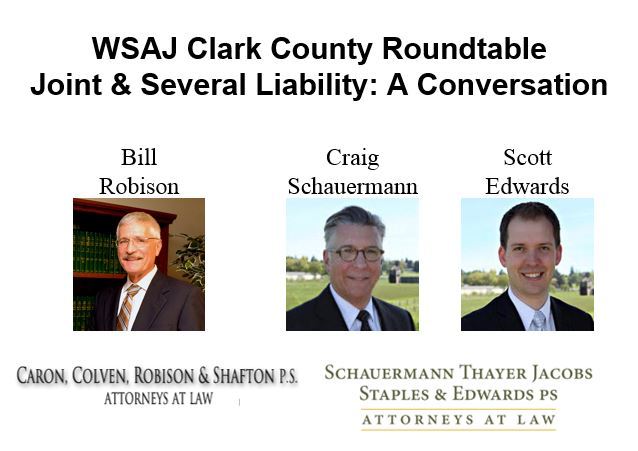 On Friday, February 17, 2017, partner Scott Edwards and co-founder Craig Schauermann--who is currently Of Counsel to the Schauermann Thayer firm--presented alongside local attorney Bill Robison to Clark County Washington State Association for Justice (WSAJ) members on the topic of joint and several liability.

For over 20 years, the lawyers at Schauermann Thayer Jacobs Staples & Edwards PS, have been EAGLE members of WSAJ.  WSAJ fights to strengthen the civil justice system for all of Washington's citizens. It opposes efforts to weaken basic legal protections which, if enacted, would further stack the deck against injured persons. Like WSAJ, the Schauermann Thayer firm believes in the fundamental principle that everyone in our society should be equal in the courts of law--extra protections and advantages should not be given to the rich and powerful or to large corporations or governments.

As EAGLE members of WSAJ we help fund the organization's legislative and public affairs efforts which protect us all. Thanks to these funds, WSAJ has one of the most experienced and respected lobbying teams in the state. As evidenced by the event on Friday, our firm also tries to stay as involved in WSAJ as possible. Partner Scott Edwards was elected to and continues to serve on the WSAJ Board of Governors.  Associate Brad Thayer is the Vice Chair of the WSAJ Roundtable Committee in Clark County (a position previously held by partner Scott Staples). And, as recently as last year, the firm took part in WSAJ's Trial Lawyers Care event in Clark County.

Over the years, WSAJ has overcome repeated attempts to pass legislation that would have further eroded the rights of injured people and has helped defeat proposals to cap damages and eliminate joint and several liability.

Joint and several liability was the particular topic covered by Craig, Scott and Bill at Friday's presentation.

However, a statute in Washington--RCW 4.22.070--sets out that joint and several liability may be achieved where an injured person is fault-free, i.e., not guilty of comparative negligence.  When this is the case, an injured person did not cause their own injury and who takes a judgment against all the other parties who did cause the injuries, can collect 100 percent of the damages they suffered from any one of the at-fault parties.  So in the prior example, substituting in zero percent for plaintiff's negligence, the 10 percent defendant with the large insurance policy or assets will be responsible to the plaintiff for the entire amount of the damages.  That defendant can pursue the (in this example) 90 percent defendant for their fair share, but that impossible problem is now in the lap of the co-wrongdoer instead of the innocent injured person.

This can be a critical tool in helping ensure that injured persons found to be fault-free are fully compensated in the wake of injury, placing the burden on those who caused the injuries, regardless of their percentages of fault.