My First Attendance of a Celebrity Book Signing 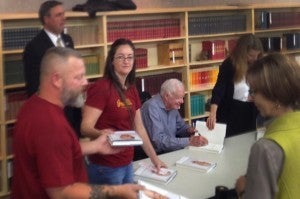 Jimmy Carter came to Portland Oregon and hosted a book signing today at Powell's Bookstore. The occasion was his new book, “A Full Life, Reflections at Ninety”.

I did not vote for him in 1977, when I was just 3 years out of high school. I voted instead for John Anderson, the candidate running for the Independent Party in that election. But over the years, I have kept an ear to the ground, and learned more and more about what sort of man is Jimmy Carter.

But I said it to him. “Mr. President, you are truly a great American.” He looked up then, just as he finished signing the last of my three copies. He flashed me his gentle smile. For just a moment, our eyes connected. To me, there was wisdom, kindness, and a bit of a twinkle to his gaze.”

So today I left work in Vancouver at 3:20 PM, expecting to encounter heavy traffic, difficult parking, and a long line. I was not disappointed. Nevertheless, I had purchased three copies of his new book, and was standing in the line that stretched all the way around the large bookstore, and in a square pattern through each of three floors inside the bookstore as well, by 3:55 PM.

The people in line were excited. Each had their own reason for being there. We introduced ourselves to each other and chatted about Jimmy Carter, the many changes in politics that have occurred over the three and a half decades or so of time since he was president, our jobs, and our lives, as we passed the time, moving forward an inch at a time. We talked about the Portland Trailblazers, a cult favorite in the Pacific Northwest, and one of my special interests as well.

We talked about Powell's Bookstore itself, perhaps the largest used bookstore in the United States, if not the world. One man asked if it will last, in this age of electronics where books are becoming obsolete. Another noted that it is a tourist attraction – people come from all over the world to visit Powell's, to roam and browse among its many rooms and the countless books displayed floor-to-ceiling upon never-ending bookshelves.

By 5:30 PM we were finally inside the building, and the pace of the line's forward movement picked up. By 5:45 PM we were being searched and scanned by Security and the Secret Service. I could really see now that the line ahead of me was moving at a rapid clip. The goal of the project was obviously to keep the line advancing, swiftly, so that all 1,500 ticket purchasers would have a chance to get their autograph before the evening got too late, and our elderly ex-president became too fatigued.

I finally had a glimpse of President Carter. He was hunkered over, very busy, signing book after book. One at a time copies of his newest work were being handed to him, rapidly, as book purchasers were herded along in front of him, being allowed just long enough to flash him a smile and thank him for his autograph.

Jimmy Carter at ninety years old. Healthy, thin of face, his hair short, sparse and white. His cheeks ruddy with the excitement of the event. He was, as I saw him there, happy, totally in his element, surrounded by secret service guards and security employees, and an admiring crowd anxious for even only an instant of his attention.

My time was approaching. I knew what I wanted to say. I was glad I had thought of something short to say.  Obviously, there would be no time for anything more.

A bookstore employee took my three copies of the new book from my hands and prepared them for the president's touch, for him to be able to easily open each to the right page and with deft hand and as little effort or wasted motion as possible, impress his signature into each copy.

I finally was able to step in front of President Carter. Only a rope and a table separated us. Maybe three feet. He signed my first copy. He picked up the second. Now would be my only opportunity. I spoke, actually rather quietly and lacking the confidence I had expected to manifest.

But I said it to him. “Mr. President, you are truly a great American.” He looked up then, just as he finished signing the last of my three copies. He flashed me his gentle smile. For just a moment, our eyes connected. To me, there was wisdom, kindness, and a bit of a twinkle to his gaze.

I smiled back at him. And that was it. I was bustled along by the handlers. The next person behind me was now in front of him, and President Carter was, just that suddenly, concentrating on signing her book. I lingered for just a moment, despite the moving line pushing me away from him, and raised my cell phone up above the heads of the people behind me, to snap a photo of him at his signing duties.

My first and no doubt last live glimpse of Jimmy Carter, the 39th president of the United States.

A man who was a Washington outsider, elected in the wake of the Watergate scandal because he spoke with candor and exuded honesty and transparency when he ran for president; personally traveling to almost all of the states of this expansive country meeting and greeting the people – outworking his opponents and shocking everyone with victories – initially in the democratic presidential primary, and finally in the 1977 national election.

An ex-president who when he campaigned in the most difficult political arena of the free world – for the presidency of the United States of America – relied solely upon his share of the proceeds from the $1 contribution offered by the presidential election campaign fund check-off box on the tax returns we file with the IRS, not on huge corporate donations and PAC monies, and who was elected without running negative attack ads against his opponents.

A man who has continued, since being defeated when he ran for a second term, to work at humanitarian causes and diplomatic missions around the world, for the betterment of mankind in general – worked to advance human rights, to eradicate disease and alleviate human suffering, to feed the hungry, to bring equality to women in countries where they are oppressed, and to advance the cause of peace among hostile nations.

An ex-president who has offered to share his experience and advice with every man who has held the office of president since his own time in office (which ended in 1981) – with all but one of his successors having been willing recipients of his input.

An ex-president who was awarded the Nobel Peace Prize in 2002, unique among American presidents to have been so honored in their time outside of being a president.

An ex-president and a man who loves to fly fish a quiet river or lake, loves the outdoors, and who respects the environment.

A person who has had but one spouse, raised four children, and seems to have withstood the crucible of all tests for solid character and come out in a positive light.

To me, Jimmy Carter, who started out rather inauspiciously as a peanut farmer born in Plains, Georgia, truly was, and still is, a great American.

I am glad I made the effort to pass briefly before him today, and offer him a moment of my respect and appreciation for all he has done and tried to do for our country, and for all of humanity.