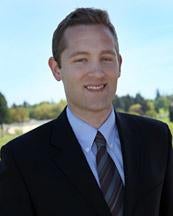 Craig Schauermann, Bill Thayer and Jeff Jacobs are pleased to announce that the Law Firm of Schauermann, Thayer and Jacobs has a new partner-more precisely, a new shareholder and principal-Scott A. Staples. All of the members and staff of the firm are very excited to have Scott as a principal in the firm!

Mr. Staples started work as a law clerk initially with Schauermann, Thayer and Jacobs while attending law school at Willamette University. He obtained his undergraduate degree in English from WSU Vancouver in 2002. He is a lifelong resident of Clark County, having attended Hudson's Bay High School. Scott has been happily married for some nine years to his wife Lesley Staples and they have two beautiful young children. While having just practiced law for three years so far, Scott has been very busy.

Mr. Schauermann had this to say about Scott's promotion:

We couldn't be more proud than to have Scott join the firm as our partner. For an attorney his age he has accomplished a lot. He has impressed us in appearing in trials before juries– and everything else we have asked of him including the capable negotiation and settlement of cases, arbitration of cases to conclusion, argument of difficult summary judgment motions successfully before the judges here in Clark County, and argument on a case of statewide importance before the Court of Appeals. He will soon do something that many attorneys never get the chance to do in their careers-argue before the state Supreme Court, later this spring. His trial work is already equal to that of a seasoned veteran. Besides bringing a winning attitude to his work, most of all he is the type of man we want to be associated with-he treats his clients, family and colleagues all with respect-and he demonstrates integrity in all aspects of his life.

The firm will be renamed, as of January 1, 2011, to reflect Scott's new status. The firm will now be called “Schauermann Thayer Jacobs & Staples, a professional service corporation.”