Personal Injury Case: How Can I Stop Them From Doing It Again?

At times I get calls from prospective clients who just want to know how to stop it from happening again. They were hurt. Somebody was careless or reckless.

“The next time,” they say to me, “They might kill someone.”

Motivation to Hiring Counsel for Their Personal Injury Case

Occasionally, that consideration ends up being the driving force behind whether or not a person hires counsel, settles a claim, or pushes their case to trial and judgment.

Ordinarily, in the personal injury cases we get called upon to handle, the client's emphasis is on trying to obtain a remedy for the damage they suffered. Just compensation for the harm that was caused to them.

But not always. Some clients just want to deter the person or entity that harmed them or their loved one from being careless again and hurting someone else, or worse yet, from killing someone.

Not every harm done amounts to a crime. Negligence is often accidental conduct that was preventable if the causing person would have just been more reasonable – more careful – but what they did wasn't enough to trigger any police or prosecuting agency into being motivated to pursue a criminal charge, conviction, fine, and jail sentence.

In those instances, what can be done – what perhaps should be done – to help drive home to the negligent party the message that they need to be more careful, to avoid hurting another innocent person?

Will the injured person's filing of a civil claim against a careless driver, a negligent dog owner, or the general contractor in control of an unsafe construction site, cause them to start to be more careful? Will suing the careless person or entity do so?

One would have to think so. Let's flip the perspective back on its heels, to get you to perhaps be able to see it from the causing person's point of view. Let's say you were the wrongdoer – having caused a rear-end car crash, hypothetically speaking, of course. If a claim were to end up being brought against you and you were uninsured, your personal assets would be at risk.

If you had good auto insurance and that claim were to be brought against you based on your alleged fault, at a minimum, the cost of your insurance premiums would go up for several years to come. You could end up having to pay attorney fees, court costs, and court reporter and expert witness fees (although often your insurer would completely cover or bear the brunt of those fees and costs).

If a judgment should end up being entered against you, to the extent it might be in excess of your auto insurance liability policy limits, your wages and bank accounts could be garnished, and other property executed against.

The point is, for normal people, with thinking brains, a risk of such consequences should have a strong deterrent effect.

Likewise with respect to corporations. And insurance companies. Claims made against them are a liability on their books until resolved. Payment of the same reduces their corporate profits. Attorney fees and other costs associated with defending against personal injury and wrongful death claims likewise reduce the company's bottom line.

Finally, the same is true with governments. Governmental entities either have to self-insure or purchase liability insurance, just as non-municipal companies do, and as individuals do.

If, for example, claims pile up against a municipality or state because a particular intersection is unsafe, because of a failure to have proper warning signs out where needed on a section of highway, or because a particular crack on a city sidewalk keeps causing people to fall and break bones, that irresponsible governmental conduct is more likely to finally get corrected if one or more of the persons injured thereby bring a claim and pursue it vigorously to proper resolution or judgment.

A Final Thought From Craig Schauermann

As my longtime law partner Craig Schauermann has noted:

“Cars are safer because of lawsuits, bars don't over-pour their customers (as much), workers are safer on the job because general contractors have gotten sued, and products are safer. Accountability brings results.”
Your case may only be a small part of the change, but it will ultimately have an effect.

In short, civil deterrence may not be the primary reason for calling a lawyer and getting advice about an injury to you, or the wrongful death of someone in your family. But if you think about it, it is not a bad reason in and of itself for doing so. 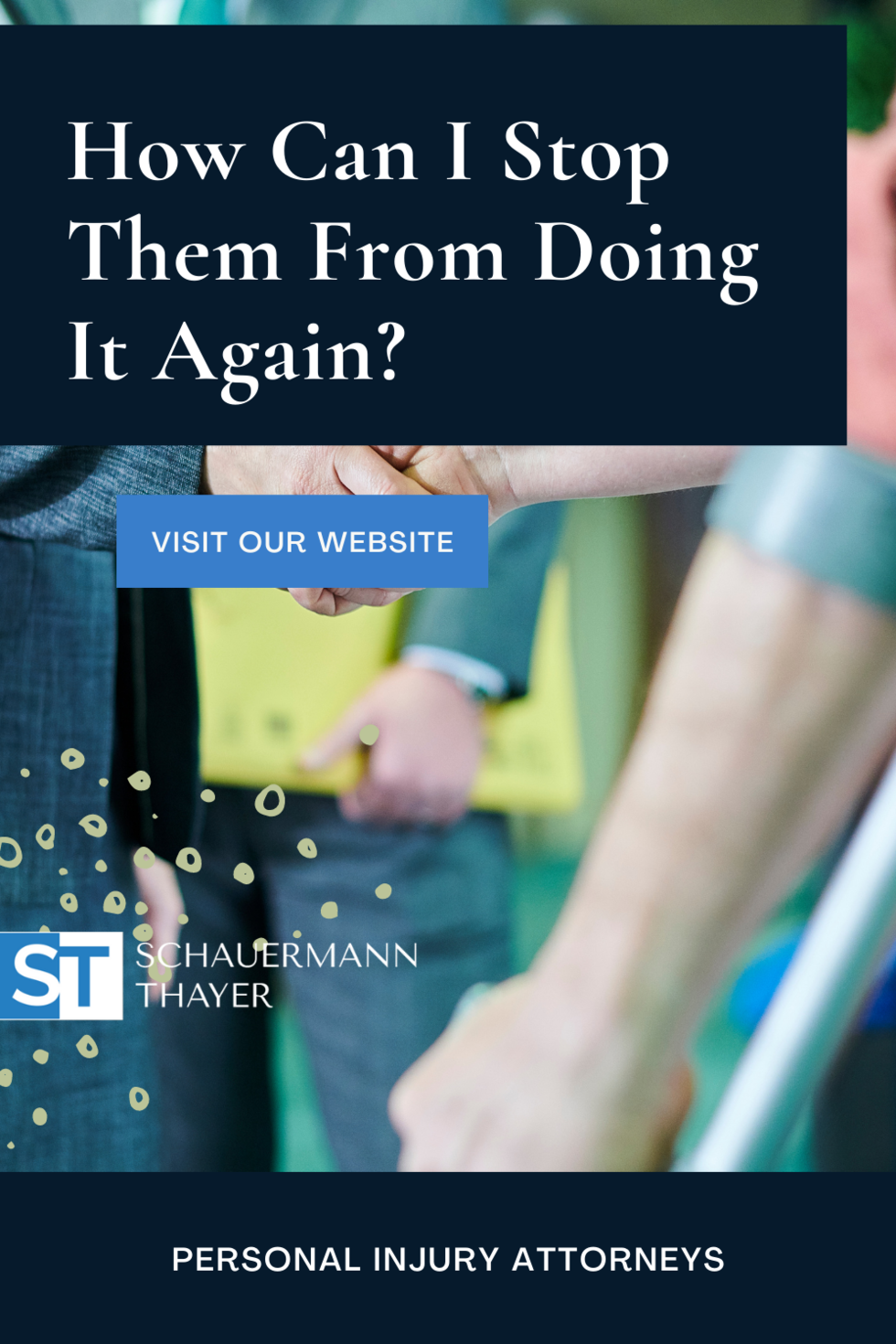