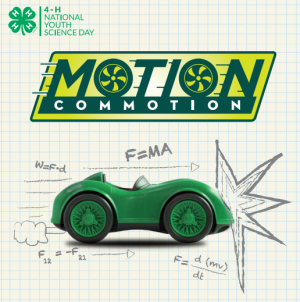 From the cover of the lesson guide (PDF) for students on the physics involved with car crashes and distracted drivers — a national 4-H “Youth Science Day” effort.

According to an Oregonian article, a “Motion Commotion experiment took place at Highland Park Middle School and at schools across the nation Wednesday as part of 4-H National Science Day.”

The article detailed how the middle school took a scientific approach to teaching students about the dangers of texting and driving. The students, “analyzed the speed, momentum and kinetic energy of a car in motion,” and how some “took the experiment further, adding weight to the car, altering its wheels, adding a roof.”  We've seen the unfortunate results, too many times, for a number of clients who've suffered from crashes involving these variables.

Hats off to local scientists, Fran Poodry, of Vernier Software & Technology, Dara Easley, of Detailedly LLC, and Matt Anthes-Washburn, of HealthSparq, whose work on “Motion Commotion” was chosen by educators from among others across the nation.  The 4-H organization is also to be commended for picking up this work and promoting it.  We found the accompanying PDF guide for students that explains who's behind the program and lays out the science involved.   The guide engages students with introductory questions like:

Have you ever felt the difference between slowing to a stop and slamming on the brakes? What physical factors influence how fast an object can stop? Do human factors play a role? Let's use physics to investigate!”

Great.  Now kids can study not only the science of vehicles in motion, but also the related problems that distractions can cause.  The most important lesson in the article, from our viewpoint, was stated like this:

Next, they used physics to experience their delayed reactions when distracted. One student dropped a ruler between the fingertips of a second student and noted the number of seconds it took to catch the ruler. Then, the student had to catch the ruler while texting. The difference in reflexes was huge.”

This allowed students to experience the concept of the dangers of texting while attempting to drive an automobile.  As the students noted, there is a high likelihood that you could end up in a crash.

It strikes us, that the same guide used in the Beaverton schools could not only be used in other school districts, but also would be a good exercise for group activities in organizations like Boys and Girls club, and at other science based retreats and camps in the local area.