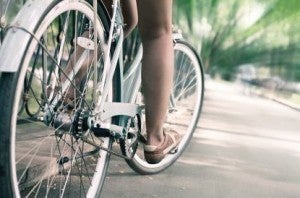 Earlier in the month, an article in the print edition of the Columbian titled “Debris in bike lanes a peril for pedalers”, detailed Vancouver cyclists' difficulties in navigating around debris within the city's bike lanes.

The article acknowledged that, with 1,800 lane-miles of streets, the city of Vancouver has a tough task in keeping every inch clean at all times. Public Works Director Brian Carlson told the paper, “Most of these calls, we're able to take care of them within a day or two. But not all the time. We can't be everywhere.”

Pidcock, an experienced Vancouver cyclist, told the Columbian that debris in the bike lane requires aversion tactics in many instances, which might mean veering into another hazard – possibly even toward vehicle traffic. “That makes the bike lane not as wide as it should be, so you've really got to pay attention,” he said.
The article suggests that while things like tree branches and rocks naturally accumulate in bike lanes and debris such as broken glass from auto collisions are possibly out of a person's control, one form of debris that seems highly preventable is litter.

“I just don't get some of the folks that think it's OK to throw crap out of their cars, and the impact that it has,” Carlson told the Columbian.

No doubt, debris in bike lanes is sufficiently dangerous to warrant drivers and passengers rethinking tossing trash from cars.

Carlson explained to the Columbian that the city of Vancouver prioritizes roadways to be swept based largely on use. Outside of scheduled maintenance, they do respond to calls and complaints. In fact, the city of Vancouver encourages folks to contact them if they see debris or hazards in bike lanes, city spokeswoman Loretta Callahan told the Columbian. The city's dispatch line is 360-487-8177. A service request can also be submitted through the city's website at www.cityofvancouver.us.

At Schauermann Thayer Jacobs Staples & Edwards PS, we like to ask what can we do as citizens of the greater Vancouver-Portland region to make our roads safer?
In this instance, it's clear that we can: (1) alert the city of Vancouver of any and all naturally occurring debris hazards; and, (2) stop dropping litter from cars which is dangerous to others on the road.

Or as Loretta Callahan opined the Columbian: “It's so preventable. Just don't throw it out.”

Link to source: Debris in bike lanes a peril for pedalers