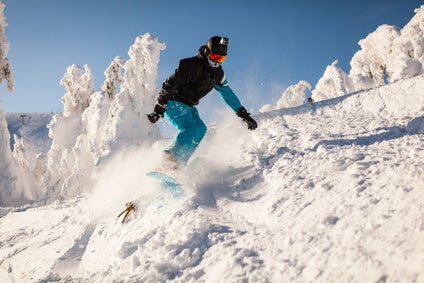 Have fun, but do exercise caution on the slopes.

Skiing and snowboarding are well loved sports, and both involve speed and skill.  While people do get hurt, luckily, serious injuries do not frequently occur, though they are devastating to family, friends, and the injured when they do.

Whether you're going skiing or snowboarding this year, there's always a need for caution, an understanding of your ability level, and the labeled difficulty ratings on ski and snowboard runs.  Plus, you need to watch out for others who may not be paying as much attention as you are on the slopes.

Ski-Injury.com reports on the frequency of head injuries on the slopes:  “If you look at the incidence of head injuries on the slopes, most studies show that they constitute about 10-20% of all injuries. Given that overall a ski or snowboard injury occurs once every 300 days or so, we can extrapolate and say that for every 10,000 people on the slopes on any particular day, no more than three people will sustain a head injury requiring medical attention. Fortunately, out of all these people with head injuries, the majority (90%) of the injuries are minor – i.e. cuts, abrasions, and minor bumps. That leaves the remaining 10% having a potentially serious head injury. This class of injury includes all episodes of loss of unconsciousness, (suspected) skull fractures, bleeds in and around the brain as well as major open head wounds (including penetrating injuries). All in all rather nasty stuff.

Go-Pro cameras mounted on a helmet can increase the severity of an injury, as the New York Post reported about skiing legend Michael Schumacher's traumatic injury:  “The problem for Michael was not the hit, but the mounting of the Go-Pro camera that he had on his helmet that injured his brain,” a French journalist reported.

Closer to home, two recent cases involving injuries on Mt. Hood slopes underscore the need for safety.  According to the Oregonian (at OregonLive.com), “A 32-year-old snowboarder who claims a 17-year-old snowboarder recklessly slammed into her from behind at Mt. Hood Meadows — causing a brain injury and headaches that won't go away” sued the snowboarder and his parents for more than $955,000.” That case stems from a 2013 incident and the report indicates that the suit then was filed in late 2014 with ongoing litigation in 2015.

In another case, a snowboarder's family sued Mt. Hood's Ski Bowl for wrongful death, according to Channel 2 News reports. 17-year-old snow boarder Taylor DeWulf died as a result of injuries sustained when she struck a tree on the Do Leg run.  “Dog Leg is an intermediate run, but the lawsuit claims it has ‘expert-level difficulty' on some portions. By labeling the run as intermediate, Taylor's family claims Ski Bowl “misrepresented the degree of difficulty.” They believe Taylor would have avoided expert-level terrain.” In this case, the allegation of negligence is directed specifically at the ski resort, who allegedly failed to protect their skiers from harm.

Many, if not all local ski resorts sell tickets that include a waiver clause. These are typically printed on the back of the ticket. and purport to force the skier to waive any rights to bring a claim against the ski resort in the event they become injured. Both in Washington and in Oregon, these waivers have been called into question and have limitations and other restrictions placed on them by the courts. In many cases, they might not be effective at all in preventing a lawsuit from being brought against the ski resort. Nevertheless, those that sign a standard waiver before enjoying fun on the slopes, should read the agreement carefully. In any event, its critical that we do our part to keep ourselves as safe as possible while enjoying everything the Great Northwest winters have to offer.

Ski-Injury.com lists three types of injuries seen on the slopes:

It's important to keep an eye out for all those things and to minimize our risk of injury/death.