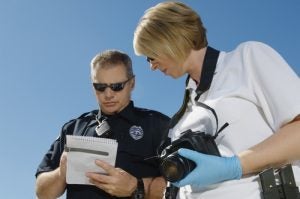 It may seem like only your car is hurt in a minor accident, but after the adrenaline settles — you could discover injuries requiring care for yourself. The new Clark County Sherriff policy on auto crashes does not prevent you from filing a police report.

In areas patrolled by the Clark County Sheriff's Office, the odds of having a deputy respond to an auto collision just went way down.

According to an article published in The Columbian on April 19, 2016, the Clark County Sheriff's Office will no longer respond to non-injury vehicle crashes that aren't blocking traffic. A shortage of personnel and a seasonal spike in 911 calls is what led to the reevaluation of patrol deputies' priorities. Deputies will continue to respond to crashes that involve a driver who may be under the influence of alcohol or drugs, a driver without a valid license, crashes involving a disturbance between the parties, if a vehicle is blocking the roadway, or if damage to public property is involved.

…most importantly, in many cases, when the adrenaline is pumping and optimism is high, crash victims don't feel like they're injured, or at least feel that what they're experiencing in terms of pain at the scene isn't worthy of an emergency response.”

The Vancouver Police Department also has a similar policy.

Our firm handles hundreds of auto crash claims every year, and based on our experience this policy change is likely going to have broad affect. That's because in a large number of crash cases that we see, none of the factors that might now draw a police response are present. Maybe most importantly, in many cases, when the adrenaline is pumping and optimism is high, crash victims don't feel like they're injured, or at least feel that what they're experiencing in terms of pain at the scene isn't worthy of an emergency response. It isn't until an hour or several hours later- after the parties have gone their separate ways- that the true extent of the injuries becomes apparent.

The reduction in police presence at crash scenes, and the corresponding reduction in police reports filed regarding crashes, may have some significant consequences for and require increased vigilance by people involved in such crashes. Police reports are often the most helpful resource we have for determining the contact information of the involved parties and witnesses, as well as insurance information. While officers arriving on scene are usually careful to record all of this critical information, sometimes the frazzled participants miss key details, or get no information at all. Officer descriptions of vehicle damage and participant behavior, as well as citations handed out, are often key pieces of information that lead to insurers for at-fault drivers admitting liability.

Because the Sheriff's Office will be coming out less often, it's now all the more important for drivers involved in collisions to be thorough in collecting information and taking photos at the scene of a crash. Here's some tips to help in that regard:

We're in business because insurance companies often fight tooth and nail on claims that the involved drivers think initially are very straightforward. Don't assume at the scene that later on everyone will be cooperative and things will work out like they should. It usually doesn't need to take forever, but at the same time don't rush the process at the expense of getting complete information at the scene of a crash. Later, you'll be glad you did.