Oregon is a Dog Friendly State 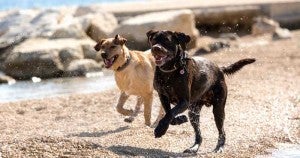 For a dog lover there are not many better ways to spend the day than hanging out at the beach with your four legged friends. Unlike some other states, in Oregon this is easy to do.  With so many dog friendly beaches, dog parks, pet friendly hotels and even tourist attractions to choose from, Oregonians might take the dog friendly nature of the state for granted but should they try to take a road trip across the States with their canine companion it would soon become clear how good they have it at home.

With completely opposing preferences, it might be assumed that those who love dogs and those who detest them, might find it hard to see eye to eye on any subject related to dogs–but that is not entirely true.  There is one thing that  dog lovers and dog detesters hate more than anything else and that is an irresponsible dog owner.  Those who love their dogs with a passion, despair when they see a neglectful owner ignoring an over excited dog running off leash close to a road. We are outraged when thoughtless owners leave their faithful four legged friends outside on leashes all day long and we are proud of our state for passing the dog tethering law limiting the amount of time a dog can be chained to a stationary object or running line. More than anything we are horrified when aggressive or reactive dogs are badly handled or poorly managed.

Responsible dog owners understand that the biggest danger to our own dogs is that neglectful and abusive owners who fail to carry out the most basic of responsible dog ownership duties including training their dogs to be good citizens, cleaning up after them and ensuring the safety of any and all pedestrians, neighbors, postal workers and any others who may come into contact with their dogs. After all, while these irresponsible people may be in the minority, the more dog bite cases or nuisance complaints there are in any city, the more likely that city will be to bring in restrictive laws and close down the freedoms that we currently enjoy with our pets.

One Bite Law in Oregon

Of course, an owner with a badly managed dog may be the source of a lot more harm than the eventual tightening of dog laws in any particular city or state.  An untrained, unguarded, unsupervised dog in the wrong place at the wrong time is as dangerous to have around as a loaded gun with the safety off. You most certainly would not leave such a lethal weapon laying around your property if anyone else – particularity children had access to it.

As with other personal injury cases the law relating to dog bite injury or fatality differs state to state. Oregon is a ‘one bite' state which means that a dog owner will not be held criminally accountable should his dog bite anyone unless the dog has a history of aggression and unpredictable behavior. In other words, if the owner cannot be expected to know that his dog is likely to react with injurious aggression in a particular circumstance – then he will not be receive a criminal charge.

This can be very hard for the victim of the dog bite to understand. Even more so in the case of the surviving family of a person who has been fatally mauled by a dog.

A recent and tragic example of the ‘one bite' rule being upheld occurred in a court case related to the death of a 5 year old child. The child's babysitter had recently acquired a dog that was described in news stories at the time as a ‘rescue pit'. Because Baker City police investigating the case found no evidence that it had acted aggressively to people in the past, the Grand Jury of Baker City declined to indict the dog's owner Mary Lane.

Hard as this decision may have been for the child's parents to accept, assuming that Ms Lane had been completely open and honest with the dog refuge one does have to question why they would have chosen to rehome a large and powerful dog with a babysitter and would therefore regularly have multiple small children in her care. Despite the Grand Jury decision not to indict, in a case like this the bereaved parents may still choose to bring a civil claim  for compensation for the wrongful death of their child.

In the Event of a Dog Bite

Dog bite cases are almost always complex. A lawyer experienced in these cases knows that a successful resolution often depends on thorough research, expert testimony, and strategic insurance negotiations. Like other personal injury cases, the statute of limitations on a dog bite injury runs after two years however it is recommended to get in touch with an experienced dog bite lawyer as soon as possible after the incident while it remains fresh in the minds of any witnesses. Please see the following page for more information on Dog Bite Cases in Oregon and Washington.