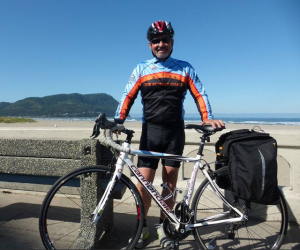 Tom rode 4000 miles across the US starting on 16 August to raise awareness and funds to fight arthritis and promote Volkssporting (from Tom’s Facebook page).

Since our own Scott Edwards is a cycling fanatic, we would like to recognize Tom Baltes of Camas and his laudable effort to bring awareness to a serious issue. Just this past weekend, Tom finished an epic bike journey, starting in Seaside, Oregon on August 16 and ending on October 4th in Portland, Maine.

Tom's journey took him through 16 states, plus Canada and is made all the more remarkable by his determination to complete this journey is spite of his osteoarthritis.

In reading about Tom, we have learned that two of Tom's siblings have rheumatoid arthritis and another has had two hip replacements. Tom considers himself lucky that although he too has a form of arthritis, he has “… not been particularly bothered by it.” Especially in comparison to those of his family who have struggled with the pain.

It is not surprising then that when Tom was planning his epic cross country adventure, that he decided to use the endeavor to raise money and awareness for a worthy cause, the National Arthritis Foundation and Volkssporting, a a family-oriented sports and recreation program open to all, that promotes physical fitness and good health.

Tom explained his motivation on a post about his journey published on the Arthritis Foundation blog:

“As so often happens on a big adventure like this, I began looking for a greater purpose,” says Tom.  “I decided it should be to raise funds and awareness for two programs that are important to me. First, I wanted to support the Arthritis Foundation, which does outstanding work to help those with arthritis, such as my siblings. Second, I wanted to support Volkssporting, which is a worldwide program for walking, biking, swimming and other activities.”

Throughout his journey, Tom has posted about his day's experiences in his own blog: Tom's Bike Ride. Passages like these, accompanied with images of the sights he saw along the way,  captured the imagination of us all:

Late today we found ourselves in Amish country with horse drawn buggies on the roads and several farms along the way.  We stopped by to visit with one gentleman and bought a few things from his produce stand.  It's funny that we just now encountered the Amish, as we traveled through the heart of their settlements in IL, IN, and OH without seeing any buggies or farms.  Most of our scenery today included beautiful apple orchards and some corn/soybean fields.  At times we were in sight of Lake Ontario, but mostly the route took us through the countryside.  A much different experience getting around Lake Ontario compared to riding along Lake Erie with its level terrain and a well developed road structure along the lake.