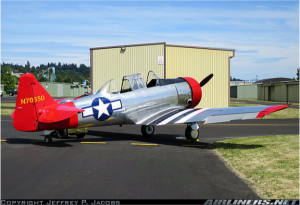 This was the plane that John McKibbin restored and often flew out of Pearson Field.

I was deeply saddened to learn of the death of my friend and fellow aviator John McKibbin. On March 23, 2016, John's airplane, a 1941 North American AT-6, the type used for advanced training of military fighter pilots during World War 2, crashed into the Columbia River near Astoria, Oregon.

Not surprisingly, John had embarked on this final flight as a favor to a friend. Terry Mustain was another aviator in our local community, who had passed away a couple of years ago. John was flying Terry's widow out to the mouth of the Columbia to scatter Terry's ashes. Sadly, Irene Mustain also perished in the crash.

John McKibbin served as a Washington State Senator and Clark County Commissioner. He was a former CEO of the Greater Vancouver Chamber of Commerce. At the time of his death he was CEO of Identity Clark County, a non-profit organization established to support local infrastructure and economy. John was invigorated by public service for the benefit of Vancouver and Clark County.

He also was a major supporter of the Washington State School for the Deaf and the Pearson Air Museum's youth education programs. When the museum's youth programs were suddenly eliminated by a federal agency a couple of years ago, John was instrumental in the formation of the independent Pearson Field Education Center, through which those programs continue to flourish. John personally mentored hearing-impaired students, encouraging interest in public service and aviation. His hangar at Pearson Field was itself a showplace for historic aircraft, and a friendly gathering place for fellow pilots.

The cause of the crash has not yet been determined. It may be as long as a couple of years before the National Transportation Safety Board issues a “probable cause” report. Weather near Astoria that day was not perfect – overcast clouds, rain showers and gusty winds – but seemingly adequate for the mission at hand. It is reported that fishermen in the area saw the airplane go into the water; their descriptions will be very important to the NTSB investigation.

John McKibbin leaves a wife, two daughters and two grandchildren – and an enduring example of public and private service.

He will be missed.