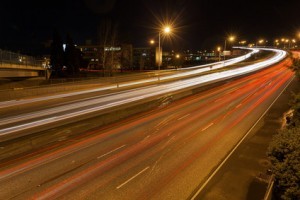 Collision rates in Portland attributed to braking practices and the impulsivity of human drivers.

At the beginning of the month, an article in the print edition of the Oregonian titled “Portland needs a crash course in safe driving”, suggested that Portland drivers who have gone seven years between auto collisions should feel lucky. The article cites new analysis by Allstate insurance company showing that Portlanders are in a collision (on average) every 6.9 years. This is roughly , one accident every 10 years.

Certainly, there is much in the story to support Chris Urmson, of Google's driverless cars initiative's opinion on the impulsivity of human drivers. At least part of the reason for Portland's poor ranking as a safe driving city, is Portlanders unfortunate habit of slamming on the brakes which they do more often than drivers in other large U.S. cities.

An effect of this, according to the article, is that high collision rates in Portland are translating into higher insurance premiums – even for the safest among Portland drivers.

It's not that we like being the bearer of bad news, but we do like to share information with everyone in an effort to keep the roads as safe as possible!

OregonLive: Portland drivers among the most collision prone