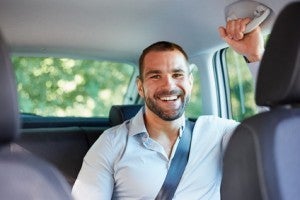 Many people are smiling about new ride-sharing services, but when it comes to insurance, concerns remain.

We wrote recently about insurance concerns regarding both passengers and drivers for the new ride-sharing services like Uber and Lyft.  Then, early this month, we noted that the Portland, Oregon City Council held a vote that, while imposing new rules for the services, allows the ride services to continue to compete in the city.

In an Oregonian article, the insurance portion of the new ruling was explained like this:

The new city rules will allow ride-hailing firms to provide two tiers of insurance — a lesser amount of coverage when a driver is signed into the app with additional coverage kicking in as soon the driver has been connected with a passenger. Taxis generally carry commercial insurance policies that have the same level of coverage at all times.”

One city commissioner, Amanda Fritz, stated an objection, to the new rules, “saying they were letting Uber and Lyft off the hook when it came to insurance coverage.”  Without getting into the politics of who should pay for insurance coverage, we again urge drivers read their own insurance coverage policies very carefully to determine how much coverage they might have while driving their cars for business purposes before they have picked up a fare.  Policy statements have been shown to vary on these points, and the term “gap area” has been used to describe the possible insurance coverage limits a driver may experience between fares, and while on the way to collect a new rider.

A recent article in Forbes, sums up some remaining ride sharing insurance concerns.  After first noting that Uber and Lyft have upped their coverage recently, this note of caution is given:  “That new insurance is only for liability and doesn't cover collision or other damages to the driver's car. (Drivers themselves are also not protected if they are hurt in an accident that is their fault, though the companies' policies cover bodily injury to passengers and others.)”

So for the time being, it looks like drivers need to double-check their coverage and consider new insurance options like Metromile, a new service in Washington and Oregon seeking to provide affordable coverage for those problematic gap areas between traditional personal vehicle coverage and the commercial coverage Uber extends to its drivers.  Their website states that their insurance products are written by insurers in the National General Insurance Group.

We would also stress that insurance regulations vary in different states and regulations vary from city to city.  Schauermann Thayer attorneys are licensed in both Oregon and Washington and see cases that rest on insurance company policies and coverage options that differ across state lines.  For now, local governments are still sorting out regulations, and it is the responsibility of ride-share drivers to secure proper coverage that protects themselves, passengers and for any occurrences when driving.  Passengers too should read up on their rights.  It remains to be seen how much protection and what rights passengers have against ride-sharing companies.