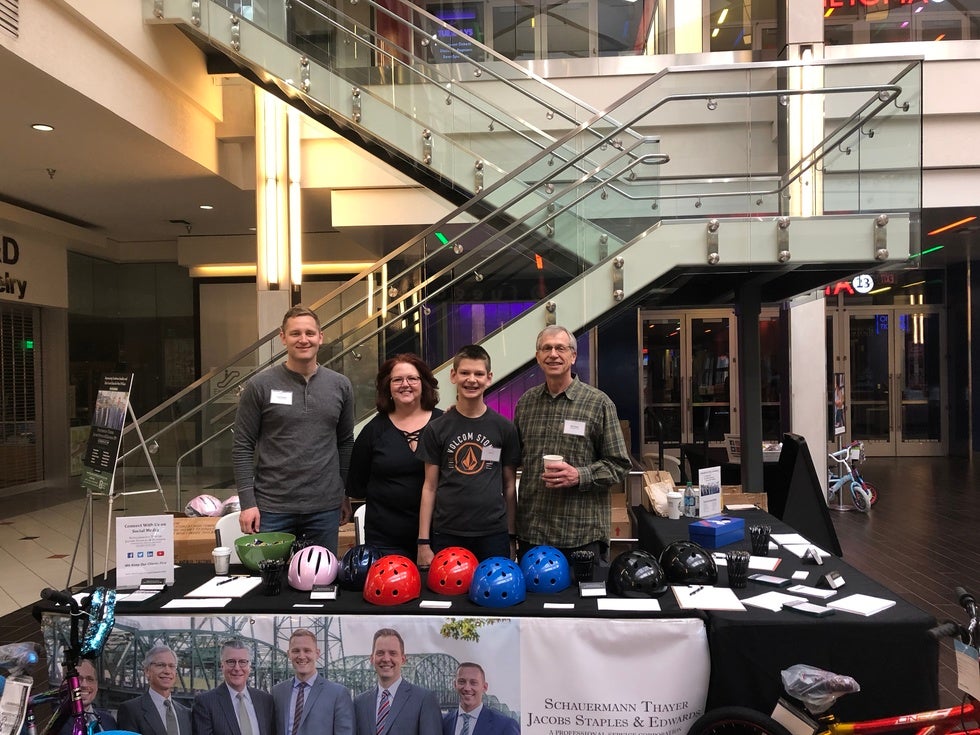 In pushing for safety through the formation of a volunteer fire department in the city of Philadelphia in 1736, Benjamin Franklin wrote:

“An ounce of prevention is worth a pound of cure.”

In the case of bike helmets, and protection of the brain, nothing could be more true.

In bicycle falls and crashes, the majority of severe and fatal injuries are to the head.

Helmet use has been reported to reduce the risk of head injuries by some 50% or more. 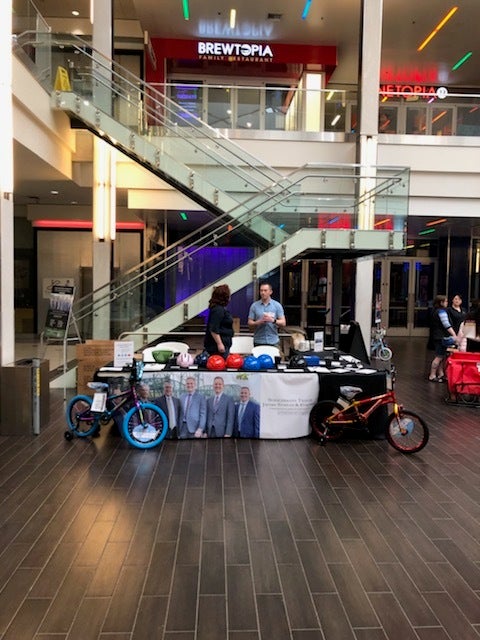 Calm before the storm (Paula and attorney Ben Melnick)

Our law firm, Schauermann Thayer, purchases bicycle helmets that we give away annually at the Vancouver Mall during the Family Magazine Children's Festival. It is a fun day. Our attorneys and staff occupy a booth which offers free bicycle helmets for kids from 10 in the morning until about 3 PM. Parents stop by with their children, and we do our best to match the sizes of the helmets to the heads of the little ones. By the end of the day, we have typically distributed about 500 free bicycle helmets to the kids of our community. 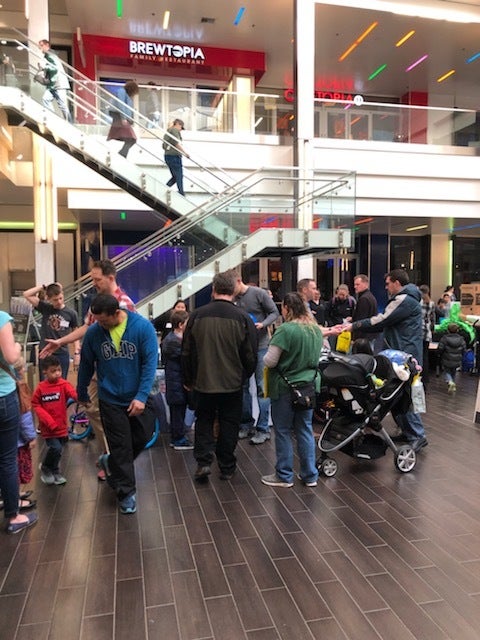 In our business as lawyers handling personal injury and wrongful death cases, we see catastrophic cases, including brain injuries, all too often happening to young people. Cases with head injuries to children that result in an outcome that can include a lifetime of severe headaches. And sometimes other, even more pervasive, debilitating, or life-altering, symptoms. Such as nauseousness. Dizziness. Vertigo. Photophobia (sensitivity to light). Impaired depth perception. Blurred or double vision. Peripheral vision limitations. Ringing in the ears (tinnitus). Sensory changes (inability to feel things when skin touched or pressed). Problems with memory. Irritability, impulse and anger control. Apathy. Loneliness. Mood swings. Reading and comprehension limitations. Word-finding difficulties. Mental confusion. Difficulty concentrating and thinking clearly. Inability to recognize previously known common things or people. Overstimulation (particularly when multiple things are going on or people talking). Other cognitive defects. Anxiety. Frustration. Depression. Problems sleeping. Bodily fatigue. And sometimes post-traumatic stress disorder (PTSD) from the traumatic event that caused the head injury.

In short, traumatic brain injury is an awful thing for anyone to have to go through. But it is particularly tragic when it occurs to a child, and it could have easily been prevented.

So let's try to prevent it where we can.

We started the annual bicycle helmet giveaway project years ago, and it has become an annual tradition. We did it again Saturday, March 16, 2019. It was, as usual, a huge success. We met a lot of wonderful parents, with polite and thankful children, who appreciated getting to trot off with a free, shiny new blue, white, red, pink, or black bicycle helmet.

I got a kick out of comments made by several parents during the day. I served as the official “town crier”, and would say, out loud to little groups and families as they walked by our booth, “Free bicycle helmets for children!“

There is no gimmick.

“Why are you doing this?”

To prevent kids from getting brain injuries if we can.

But my all-time favorite was this question from a father, and my law partner Scott Edwards' response to it.

“Just promise me you'll make your kids wear them.”

It's like the wise duty sergeant would say to end the daily briefing of his police squad in the early 1980s TV show, Hill Street Blues:

“Now, let's be careful out there.”