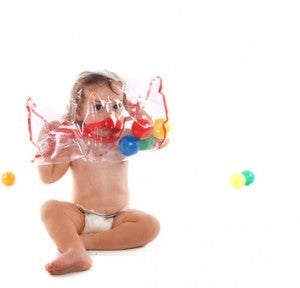 Unsafe toys come in many forms, shapes and sizes, but attorneys are still the last line of defence in many cases.

Most parents know to watch toys carefully and guard their children against choking danger and other hazards.  Labels have gotten better — but did you know that nearly a quarter of a million children are still treated at U.S. emergency rooms for toy-related injuries every year?

The Consumer Product Safety Commission (CPSC) reports that choking hazards were the leading cause of toy recalls as recently as 2009.  Despite their best efforts, 196 children died from choking on toy parts, small balls and balloons between 1990 and 2007.

In addition to choking incidents, another rising concern is the use of small, powerful magnets by toy manufacturer's.  Once swallowed, magnets quickly erode through the intestinal wall, spilling bacteria into the body.  According to Wikipedia, “the Centers for Disease Control reported 33 cases requiring surgery and one death. The magnets have been swallowed by both toddlers and teens (who were using the magnets to pretend to have tongue piercings).”

Court cases have been successful in prompting the CPSC to take action.  According to the American Association for Justice, the family of a toddler who died after ingesting nine tiny magnets, filed a lawsuit which led to recall of the dangerous toy by the CPSC and helped raise awareness across the nation about hidden dangers of magnetic toys.

As recently as 2012, the Federal Government brought a lawsuit against “the maker of the popular magnetic desk toy Buckyballs to stop the sale of the product because of the risks posed to children”, USA Today reported.   The article also stated that, “Some major retailers, including Amazon, Brookstone and Urban Outfitters, have agreed to stop selling these and similar products at CPSC's request.”  But this particular case carried with it some controversy when the manufacturers accused the CPSC of trying to put a New York based firm out of business.  The firm accused the CPSC of trying to shut down a “$50 million business,” but the mother of a 12-year-old child that required two surgeries to remove the balls from her bowels countered with, “any child's life is worth more than $50 million.”

At our firm, we are pleased to be a part of the civil justice system that has inspired toy recalls and brought to the attention of parents the dangers from toys which they may not have been aware of prior to related court cases.