Reflections: On Justice and the Law

“Law is a lot more than words you put in a book, or judges or lawyers or sheriffs you hire to carry it out.  It's everything people ever have found out about justice and what's right and wrong.  It's the very conscience of humanity.”

The above is taken from the novel “The Oxbow Incident”, by Walter Van Tilburg Clark.

Sometimes you read a book or see a movie and it stirs you a certain way.  Makes you think. 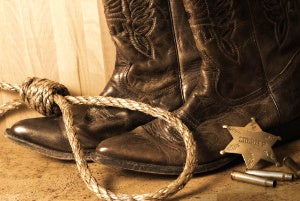 I have been practicing law for over thirty-four years now, and the longer I continue to work in the arena which is our civil and criminal justice system, increasing my understanding of the body of laws that our nation and states have adopted to facilitate our system of government, to police and regulate our communities, and to resolve our civil disputes, the more I believe that we are blessed to have the legal system that we have.  It perhaps isn't perfect, but it offers hope for fairness and justice in matters calling for resolution by a neutral intermediary far beyond any other legal system I can imagine.

My wife and I recently watched the movie “The Oxbow Incident.”  It is an old western from 1943, directed by William A. Wellman, based on the novel of the same name written by Walter Van Tilburg Clark.  In the first making of this movie, a very young Henry Fonda played the part of a man named Gil Carter, and his sidekick, played by an equally young Harry Morgan, was Art Croft.

The characters in the film, including Gil Carter, seemed remarkably idle in the early frames of the movie, which opens up in a saloon in a dusty Nevada cow town.  They drank, talked in short and irritated bursts, and seemed to set upon each other with fists and bottles over the head with little or no provocation.

The plot gets more intense when a posse forms up to give chase to some suspected cattle rustlers and to avenge the reported murder of a rancher named Kinkaid.  This the group learned of when a cowhand rode up to the saloon yelling that he'd seen Kinkaid's cows in the possession of “rustlers”, and of having supposedly seen a bullet wound to Kinkaid's head.  The town shopkeeper, a Mr. Davies, along with the local judge, tried to talk the townsmen and their self-appointed leader “Major Tetley” down from a hasty decision to pursue anyone—at least before what had really occurred, if anything, and who had perpetrated it, were better known.

The sheriff of the town, Davies pointed out, was already off looking into the facts of the alleged crimes.  Best to wait for his return, he admonished them all.  The judge warned them too—there was no legal basis to swear in a posse.

Despite Davies' and the judge's protests, though, a large group formed up, collected hanging ropes, and without any lawful authority to do so, rode off in search of “justice”.  Gil Carter and his friend Art Croft rode along, apparently lacking any better way to spend their time, and perhaps also to avoid becoming suspects themselves of what was starting to appear to be a very trigger-happy lynch-mob.

The posse rode into the night, and up in the hills, where as expected, they found three men sleeping and in possession of some of Kinkaid's cattle.  After being wakened at gunpoint and questioned, the suspects could not produce any bill of sale for the cattle.  Major Tetley proceeded to—on the circumstantial evidence before him and a presumption of guilt—sentence the three men to death by hanging.

One of the prisoners name Donald Martin was given the leniency of getting to pen a final letter for delivery to his wife so that she and their young children would know what had become of him.  Davies, who along with a few others had made it clear he was against the hanging, was entrusted initially with possession of the letter after it was written.  He read it, and then begged the others in the group to also do so.  But they wouldn't.

You can guess what happened next.  The mob went through with the lynching, and with three bodies swaying in the morning light behind them, the lot of them began to ride back to town.  On the way back, they encountered the sheriff.  Turns out, he informs them all, the cowhand had gotten it all wrong, Kinkaid had not in fact been killed, and he had indeed sold some of his cattle to Donald Martin.  The posse had killed three innocent men.

In learning of what they had done, the sheriff was aghast at the lynching and told the townspeople who had been a party to it that he ought to have all of them, except the few who had stood against the hangings, put up for trial on murder charges.  But he still had to pursue the real cattle rustlers that had not yet been apprehended, and so he turned his back on the lynch-mob, which rode dejectedly rode back to town.

There is a scene at the end of the movie.  The shopkeeper Davies had asked Gil Carter to carry the letter written by the hanged man Donald Martin to Martin's wife.  The bulk of the men who had been out with the posse are standing at the bar again in the local saloon where the opening scenes of the movie had taken place.  Gil Carter and Art Croft are there for a final shot of “fortitude” before they go to take the letter to Donald Martin's widow and children.  Hovering over their shots of whiskey, Carter laments to his friend Art that Donald Martin's letter hadn't been read and considered earlier, before Martin was hung.  Carter slowly reads it aloud to his friend.  Quietly, but overheard by most of the now very somber lynch-mob:

Mr. Davies will tell you what's happening here tonight.  He's a good man and has done everything he can for me.  I suppose there are some other good men here, too, only they don't seem to realize what they're doing.  They're the ones I feel sorry for.  Because it will be over for me in a little while, but they'll have to go on remembering for the rest of their lives.

A man just naturally can't take the law into his own hands and hang people without hurting everybody in the world, because then he's just not breaking one law but all laws.

Law is a lot more than words you put in a book, or judges or lawyers or sheriffs you hire to carry it out.  It's everything people ever have found out about justice and what's right and wrong.  It's the very conscience of humanity.  There can't be any such thing as civilization unless people have a conscience, because if people touch God anywhere, where is it except through their conscience?  And what is anybody's conscience except a little piece of the conscience of all men that ever lived?  I guess that's all I've got to say except kiss the babies for me and God bless you.  Your husband, Donald.

There is a reason for our system of justice.  When he wrote this story, with his words expressed as frontier eloquence, Walter Van Tilburg Clark put his finger on the pulse of it.