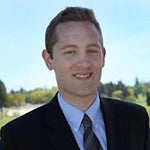 Scott has volunteered time for the past several years at the Clark County Volunteer Lawyers Housing Justice Project. He has previously served on the new member and membership committees for the Washington State Association for Justice (WSAJ), and has acted as chair and co-chair of the WSAJ Clark County Roundtable. He is a member of the Washington and Oregon State Bar Associations, WSAJ and OTLA (state trial lawyer organizations), and is admitted to practice in all state and federal courts in Washington and Oregon.

Scott was born and raised in Vancouver, attending Vancouver public schools and graduating from Hudson's Bay High School. He enjoys playing recreational basketball and softball, skiing, and spending time with his wife and three children.