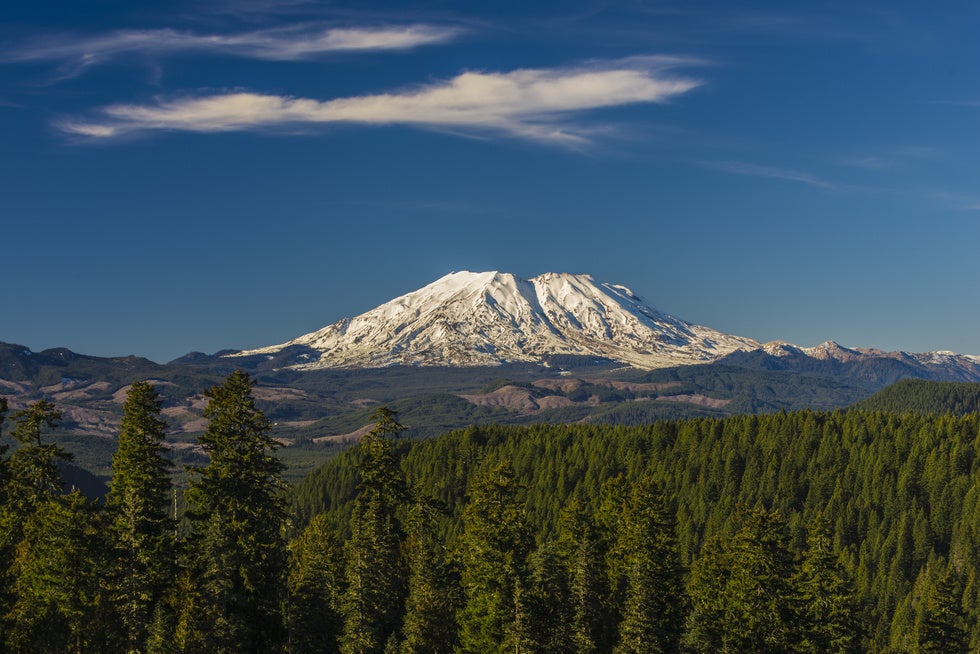 If you can just see it right, the glass is half full.

My wife and I were driving north last week across the I-5 Bridge. It was sunny out. Through our front windshield, we could see Mt. St. Helens directly ahead of us. Its flattened top, what remains after the peak was blown off as part of that massive volcanic eruption in 1980.

Off to our right, large and crystal clear, was Mt. Hood. Brilliantly white. Rugged and majestic. (Don't worry, my wife Lori was driving. It was totally safe for me to be sightseeing.)

In between, obviously many miles in the distance, however, sat a third significant snow-covered mountain top. At first I was perplexed, seeing three peaks from I-5. I had to think for a moment before it came to me. Jefferson? Adams? Rainier?

Now that I think back on it, I do recall that it was not unusual – quite some number of years ago at least – to be able to see Mt. Adams from Vancouver. But in the last decade or so? I don't think so.

And have you stepped out recently on a clear night and looked up in the sky? The stars are many, and unusually bright. So what is different?

Across the globe, people have been ordered, or as a matter of choice have decided, to stay at home. All in the hope of stopping the spread of the novel coronavirus. Or at least of “flattening the curve”.

Our machines, that burn fossil fuels and pollute our air and water, including over 1.4 billion in cars alone around the world, have been largely stilled.

And one logical side-effect of the global quarantine is cleaner air. Less smog. Better visibility.

There was an article in The Oregonian recently, entitled, “Environment: As People Stay Home, Earth Turns Wilder and Cleaner”. It indicates that researchers are noting dramatic drops in traditional air pollutants such as nitrogen dioxide, smog, and tiny particles.

That nitrogen dioxide pollution in the northeastern United States is down 30%, and that Rome, Italy's air pollution levels from mid-March to mid-April are down 49% from one year ago.

That for the first time in decades, residents of Jalandhar, a city in north India's Punjab, were able to see snowcapped Himalayan peaks more than 100 miles away.

Meanwhile, from the I-5 Bridge, between Portland and Vancouver, Washington, for the first time in decades, my wife and I had a first-rate view of not just one, or of two, but of three stunning mountaintops all at the same time.

I'll take it. Any little piece of good news, demonstrably true, in these strange times of quarantine, economic catastrophe, and daily infection and death counts – local, statewide, nationwide, and global – is more than welcome.

In fact, I think I'll step outside, into the backyard, and take a deep breath of some clean air.