Systemic issues and the disproportionate impact they have on particular communities within our American population and society are at the forefront of our collective mind and important discussions are being had on a national level right now.  As attorneys, our local bar associations and courts are cognizant of and working to better understand and address these issues in the local and national legal systems.

Most commonly it seems that the systemic issues needing to be addressed in our country discussed are more applicable to other areas of the law and legal practice, such as criminal law, landlord-tenant law, employment law, and/or immigration law (as opposed to our sole practice focus of personal injury and wrongful death law).

Although the issues highlighted aren't with respect to the law of personal injury and wrongful death itself, a recent Willamette Week article entitled Black Portlanders are Killed Crossing the Street at Three Times the Rate of White Pedestrians highlighted (and explained, on some level) systemic issues making the black population of Portland, Oregon more at-risk for personal injury and/or wrongful death than the white population.

The article's source is a traffic safety nonprofit called Oregon Walks, which conducted an in-depth study of traffic deaths occurring between 2017 and 2019 in Portland.

The likely factor influencing the disparity in pedestrian death rates in particular that the article ultimately points to is income disparity.  The pedestrian death rate was significantly higher in the neighborhoods of East Portland, where the article explains people of color have been economically displaced to (outside of the inner city).  The article also explains that the roadways in those areas are also not lit as effectively and are thus darker than roadways in the wealthier areas of Portland. 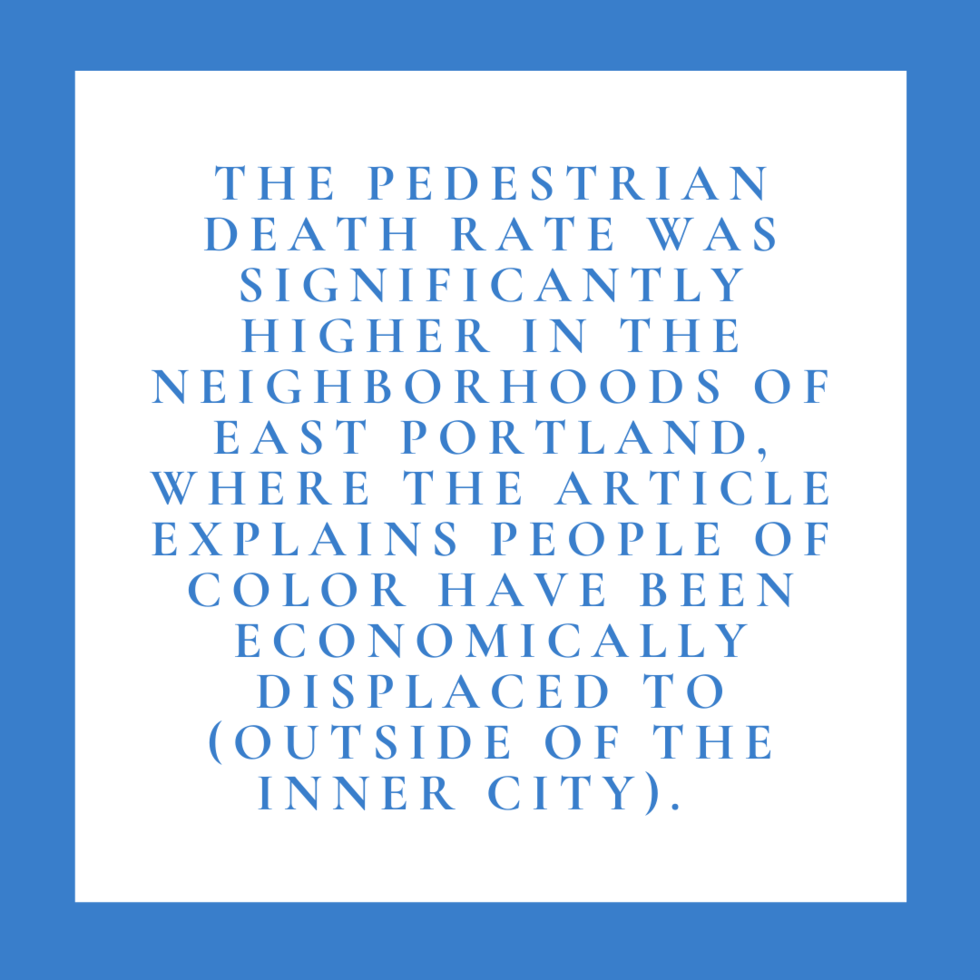 Not a One Time Occurrence

The Oregon Walks board member quoted in the article, Timur Ender, suggests that particular traffic incidents should not be viewed as one-time occurrences and rather should be viewed as a result of a greater, systemic issue.  This way, it's easier to fully understand the impacts being felt by under-resourced neighborhoods and residents in Portland.

The article does have a hopeful note, in terms of improved community safety, on recent spending and future plans to invest in making the roadways in East Portland safer by the Portland Bureau of Transportation, according to PBOT spokesman Dylan Rivera: “PBOT [] spent $8 million on safety improvements in East Portland last year and is currently working on a 13.6 million project this year including new street lighting.”

This article and viewing the greater context of injury-producing incidents is indisputably important.  The daily motivation that drives our firm and our profession is this: Our greater collective community needs to be as safe as humanly possible for everyone in it.