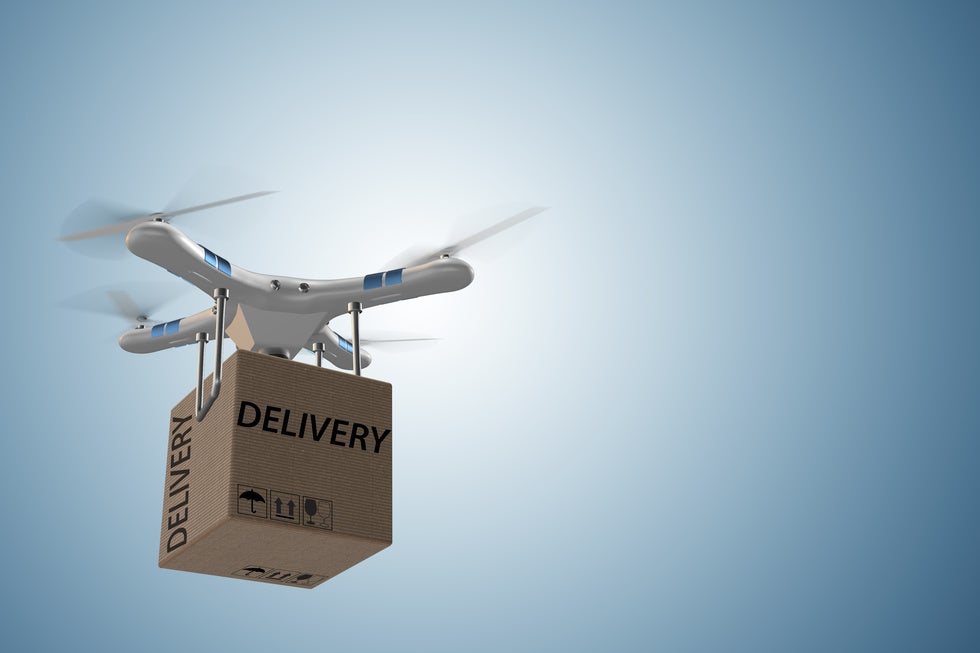 We recently blogged about Waymo's autonomous cars (here) and John Deere's driverless tractors (here). Now, we have “Wing” by Alphabet (the parent company of Google and Waymo), which has produced an unmanned flying product-delivery drone. Did you know that trial flights of Wing drones recently began making actual deliveries in Frisco and Little Elm, Texas?

Initially, its drones will be delivering pet medications from Walgreens, ice cream from a creamery, and other select products to suburban residents in those two Texas communities.

The process? Outside their store, retailers affix a product with a weight of 2.6 pounds or less to an automated drone. It climbs and flies off at a cruise height of 150 feet until it is over its target consumer destination. There it drops to an altitude of approximately 23 feet, and lowers and drops its package using a cable system. The drones are unmanned, but “pilots” at a remote location are available on standby to monitor the flight, should something go wrong.

Yes, the world is changing.

Ready or not, here it comes.

With the change – in our level of trust in the artificial intelligence (AI) that has been developed, and now with the actual deployment into our everyday lives of that automated technology – should also come legislation that protects all of us from AI's inevitable occasional misfires. As a lawyer who handled tort cases for over 40 years, I can only imagine that there will be problems – including airspace conflicts, invasion of privacy challenges, bird strike and other environmental concerns, as well as human injury issues – emerging from these unmanned drone delivery flight trials and, even more so later when they become a part of all of our daily lives.

Recognizing that probability, I can only hope our lawmakers are abreast of these new technologies, and already actively engaged in planning and forward-thinking as to the new laws that will need to be enacted, and how existing laws should be modified, to smooth the crossover – from the old to the new.

As alluded to above, a then-young artist some 58 years ago penned lyrics that seem prophetic, and which still capture the spirit of our times:

Don't stand in the doorway

Don't block up the hall

For he that gets hurt

Will be he who has stalled

The battle outside ragin'

Will soon shake your windows

And rattle your walls

For the times they are a-changin'

(Lyrics from Bob Dylan's “The Times, They are a Changin' ”).