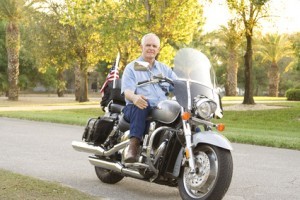 I noted an article entitled, “Motorcycle Deaths Rise for Boomers” in the Marketplace section of the Wall Street Journal on Monday, December 22, 2014. According to it, the National Highway Traffic Safety Administration recently reported that there were 4,668 U.S. motorcycle crash deaths in 2013. Factoring in weather variations (more people get out and ride during years with better weather), that statistic is apparently pretty much in line with the annual trend since 2011.

The article offers several examples of what we often see in our law practice here at Schauermann Thayer Jacobs Staples & Edwards PS – cautious motorcycle riders severely hurt or killed by car drivers that turn left across the motorcyclist's right of way, or that change lanes into them, failing to see the motorcyclist until it's too late, or at all. The point of this particular article was that there is a statistical uptick in the number of fatalities amongst older motorcycle riders.

“although older riders may be less reckless in their habits, they are also more vulnerable. Vision isn't as sharp, and reflexes aren't as quick, as they once were.”

People between the ages of 55- and 64-years-old today are in the “baby boomers” group. They continue to make up a greater percentage of the national population, so it would only make sense that their representation in the population of motorcycle riders in this country has likewise increased. But beyond that, the article suggests, some men that rode a motorcycle in their twenties, after “hanging it up” during their years of settling down to raise their families, start riding again once their children are grown, when they have more time and money available to buy motorcycles and ride. Sounds like a nice story, particularly when you recognize that with maturity, we all naturally tend to be more cautious and prudent.

But, there are concerns. Motorcycles manufactured today are apparently typically equipped with significantly more powerful engines than was typical of the bikes in the 1960s, for one thing. And, although older riders may be less reckless in their habits, they are also more vulnerable. Vision isn't as sharp, and reflexes aren't as quick, as they once were. Obviously, too, older human bodies are more fragile, and the healing process may not be as kind to a 55-year-old as it would be to a 25-year-old.

So for those of us in the “boomer” age group, all of this is probably something to keep in mind. The number of deaths per 100 million miles traveled was 26 times higher for motorcycles than for cars in 2012. The feel of the wind in your face on the road may be wonderful on a warm summer day, but there are other ways, safer ways, to rekindle your zest for life, if you are in your 50s or 60s and looking for adventure.

As trial lawyers who handle motorcycle accident cases, we tend to see the worst. Riding a motorcycle at any age has its risks. Per the Journal article, according to James Hedlund, a traffic safety consultant in Ithaca, New York (and a former senior official of the traffic safety administration), “The way to make a motorcycle safe is to put four wheels and a body on it.”

Good, bad, or indifferent, the point of the December 22 Wall Street Journal article seems to be, simply put, that it may not be a good idea to mix advanced age with motorcycle riding.

Nevertheless, we know and understand that many will choose to face the risks involved in riding a motorcycle – even if those risks may be greater for them than for the average population.  It's important to remember that motorcycle riders have the same rights on the roadway as all other motorists.  These rights include the right to expect that others will obey the traffic laws designed to keep us all safe, and the right to full and fair compensation when another driver breaks those laws.  And, especially since injuries sustained while riding a motorcycle can be catastrophic, if the need arises for counsel following a motorcycle crash case, it is important to be represented by attorneys experienced in handling the special issues inherent in motorcycle injury cases.