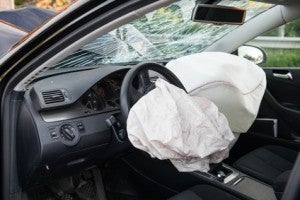 Airbags are supposed to protect you — but over 7 million Americans are at risk of suffering a severe injury or being killed by them.

The National Highway Traffic Safety Administration (NHTSA) has urged 7.8 million owners of certain Toyota, Honda, Mazda, BMW, Nissan, Mitsubishi, Subaru, Chrysler, Ford and General Motors vehicles to act immediately on recall notices to replace defective Takata airbags.  The defective airbags can explode when released, effectively firing shrapnel instead of protecting you from injury.  The New York Times relates just one of many stories where a woman was killed by what looked at first like knife wounds to the neck.  It wasn't done with a knife.   The cause was a faulty airbag made by Takata of Japan.

So it's no surprise that the NHTSA expressed urgency in their press release, writing, “The message comes with urgency, especially for owners of vehicles affected by regional recalls in the following areas: Florida, Puerto Rico, limited areas near the Gulf of Mexico in Texas, Alabama, Mississippi, Georgia, and Louisiana, as well as Guam, Saipan, American Samoa, Virgin Islands and Hawaii.”

If you live in Washington and Oregon, and own 2000 era Dodge, Mustang, Outback, Acura, Ranger, Accord, Pathfinder, or another of over 20 other models,you will need to change out your airbags too — see the full list of years and makes at the NHTSA site.  You can also search by VIN number in the SaferCar.gov database.

But the Oregonian is reporting that though the NHTSA warning was to take immediate action, some Dealers do not have the necessary parts yet:  “If parts aren't readily available at Beaverton Toyota, for instance, the dealer disengages the front-passenger air bag and puts a tag on the glove box warning that no one should occupy the seat until a replacement part is installed.” (from an article by Joseph Rose).   How long will the wait be?  In the same article, Rose states that it could be up to several weeks.

So what are the best steps for you to take now?  “Now that the warning is out there, you need to heed it and take your car in for immediate service,” advises Scott Edwards, one of five personal injury attorneys for our Firm.  “You at least want the dangerous bag out of your vehicle, and hopefully your parts will come in soon.  Don't carry a passenger in a seat without a safe working airbag. And remember to review your insurance policy we always advise clients to make sure they have ample coverage which includes PIP amounts that can help pay for your medical bills and other people involved in an accident. Sure, our firm can work with you when you need a car accident attorney, but safety is the primary concern with regard to these defective airbags.”