Recently, the Columbian published an article entitled Fatal crashes up sharply this year: 26 vehicle crash deaths in county in 2014 well above average for recent years. The article included both local and state statistics and showed that there have already been more vehicle crash deaths this year in Clark County, than in either the full 2012 or 2013 calendar year. A general observation of author was that those killed were not from a specific group or demographic and were using the roadways in nearly every way possible. The victims include drivers, passengers, pedestrians, bicyclists, and skateboarders. 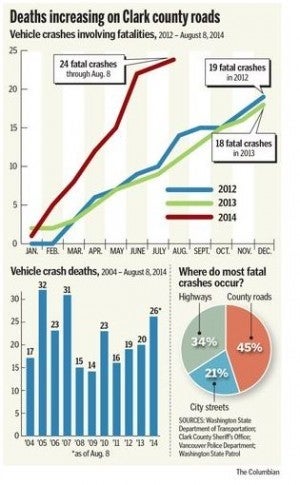 The author summarized the stories of many of the victims and spent much time, and many words, discussing the insufficient number of traffic patrols and collision investigators. She seemingly went so far as to place blame upon the city and county for a failure to provide adequate traffic patrols:

As a result [of a lack of commonalities among the collisions], it's difficult to say what could be done to prevent more fatal accidents, other than to increase traffic patrols everywhere.

Can we as a society continue to allow such a complete and total lack of responsibility on behalf of our drivers?

I don't mean to discount the great work our traffic and patrol officers do on a daily, even constant, basis. Their work is extraordinary and deserving of praise. They undoubtedly make our roads safer for each of us. The fact remains, there would be no need for increased “DUI enforcement” or stepped up “traffic patrols” if drivers (and victims) were held accountable for their wrong choices. These deaths are, for the most part, preventable.

The common term for crashes, wrecks, and collisions is ‘accidents.' However, the word ‘accident' is misleading. If you crash because you were distracted, tired, or not driving defensively, it is a preventable crash, not an accident. Because true accidents are rare, this manual generally uses the words crash, collision or wreck.”

How true is this statement?

When we point blame at the people responsible for ensuring we follow the rules, instead of accepting blame for not following the rules, we not only deflect our own personal responsibility, but we create an environment where it is okay to disobey the safety rules so long as we don't get caught. The trouble with this mentality, with this line of thinking, is that “getting caught” is not the greatest harm caused by breaking the driving safety rules. The greatest harm caused by breaking the driving safety rules is twenty-six vehicle crash deaths so far this year. Greater yet is that these deaths, and the thousands just like them throughout the United States were preventable. These deaths occurred not because of insufficient patrols, but because someone chose to break a driving safety rule.

We must demand a greater responsibility by drivers. We must hold accountable those drivers who choose to break the traffic safety rules; especially where injury or death result, but even where it does not. As we do so, we will see improvement. Lives will be saved not lost. Even if only one life that is spared, that is one life in the right direction.