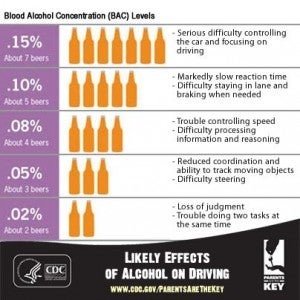 It goes without saying that no matter how wonderful the presents are that are wrapped under the Christmas tree this year, a full and healthy life is the greatest gift of all. Having one's loved ones with you to share the festive season and all the days of the coming New Year are gifts too. Priceless gifts, that are sometimes appreciated far too late.

We are saddened by the reports of multiple fatalities in two separate incidents in Scotland and France just before Christmas this year. In neither case – an out of control garbage truck in Scotland and a terrorist attack in France involving a car –  were those who lost their lives to blame. They were innocent bystanders whose loss will irrevocably change the meaning of Christmas for all who loved them.

As we think of those grieving families on the other side of the world, we are also saddened by the knowledge that in our own states of Oregon and Washington, there will be car crash fatalities this festive season. Unfortunately there is every likelihood that some of those who will be involved in a car accident or lose their lives in a crash are at least partly responsible for their own  fate. We know from sad experience that there will also be innocent victims of these crashes. Those who are hurt or who lose loved ones in a fatal car accident caused by an alcohol impaired driver.

It is not hard to imagine how a driver intending to have one single drink at the office's Christmas party is convinced to have ‘just one more'.  That one leads to another and before you know it, the driver has had that crucial drink – the one that impairs his judgement so badly that he is convinced that he is invincible and can drive home safely although he is well over the legal limit.

The CDC offer several measures that can be taken to lower the incidence of impaired driving both through the holiday season and at all other times of the year. These include:

Clearly these are steps that are intended to be taken by various government bodies but to rely only on legislation and government measures to prevent drunk driving is to abdicate personal responsibility. The effects of  alcohol related car crashes are felt by everybody. From the child who will miss one or both of his parents this year, to the city residents who pay higher taxes to cover the cost of road maintenance and emergency services.

We can all take steps to make the roads safer this year.  One of the first steps to take is to memorize the chart above and understand just how quickly alcohol has an effect on judgement and co-ordination. The CDC also publish a list of safety tips that can be taken by individuals to prevent themselves or their friends  and loved ones from falling into the Christmas drunk driving trap.

Individual Safety Tips from the CDC

Whenever your social plans involve alcohol, make plans so that you don't have to drive after drinking. For example:

We would like to offer one final tip.  Never encourage a driver to have ‘just one more'.  Referring again to the chart above you can see that it takes only two beers to impair judgement. How would you feel if it was that one last drink that caused your friend not to be  sharing Christmas morning with his family this year?