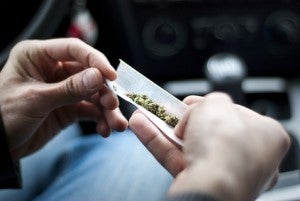 Pot smoking and driving are not good things to mix.

No matter your thoughts on the legalization of marijuana sales in Washington in 2013 – like alcohol, marijuana and driving are a dangerous mix. Recent numbers generated by the Washington Traffic Safety Commission confirm this and show this mix is becoming more common on Washington roadways.

The Associated Press reported on August 20, 2015, that nearly twice as many Washington drivers in fatal crashes tested positive for active THC – jumping from between 32 and 38 THC-influenced drivers per year 2010 through 2013 to 75 in 2014.”

Traffic Safety Commission member Shelly Baldwin told the AP that this is particularly alarming because the number of alcohol-related fatal crashes has been falling (from 214 in 2009 to 144 in 2014).

Oregon recently legalized marijuana.  The statistical data has not come out yet for Oregon as to impact on traffic fatalities, but we assume it will be similar to that reported for Washington.

At any rate, please keep this troubling new trend in mind when driving, and be safe.