Last week, Bill Thayer made the point that calling a car crash an accident is a bit of a misnomer. A true car accident is rare, because in many cases the event was precipitated by a totally avoidable choice. Whether the choice was made by an overtired driver continuing to drive, an unlicensed teenager driving recklessly, or the sadly and increasingly common, texting driver the results can be, and all too often are, fatal. As the largest personal injury firm in Southwest Washington, Schauermann Thayer Jacobs Staples & Edwards PS attorneys have experienced all too many tragic cases, whereby a family has lost a beloved parent or child, thanks to somebody else's bad choices. Alcohol of course, is one of the most frequently seen factors in fatal accidents. Nationally in 2010, 31% of all fatal accidents was caused at least in part by alcohol impaired driving. In Washington, that statistic raises to 37% – nearly 20% higher than the national average. Let's take a look at some other factors involved in traffic accidents in Washington: 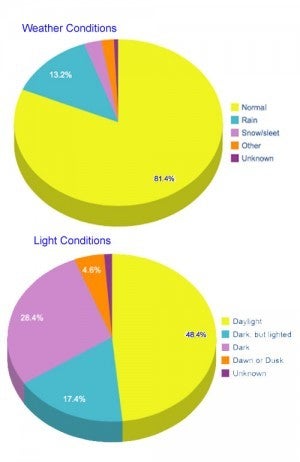 But wait a minute, you might be saying – surely many car accidents are caused by extreme weather conditions. You can't blame that on driver choice. Of course, there will always be unavoidable circumstances where a driver simply must reach his destination no matter the current weather conditions but even so, it may surprise you to know that according to the National Highway Traffic Safety Administration most fatal car crashes in the Washington area occurred in full daylight under normal conditions.

According to the Washington Traffic Safety Commission there were 711 fatal crashes in the 5 year period between 2008 and 2012 which involved young drivers between the ages of 16 and 25 in the Washington area. In total these resulted in 794 young driver involved (YDI) deaths. More than half of the crashes resulting in this loss of life involved a young person driving under the influence of drugs or alcohol. Almost 50% of crashes involved a speeding driver and another 22.9% involved a driver who was distracted. The statistics are horrifying and of course, all too familiar to insurance companies. That is why even though young drivers pay high premiums, it will often still require a great deal of experience in order to negotiate a fair settlement from an insurance company in the event of a car crash involving a young driver.

Use of Safety Belt

Washington does fare well in comparison to other states in use of restraint. In 2012, daytime observational studies showed that drivers and front seat passengers in Washington were buckled up 97% of the time. This compares very well with the likes of New Hampshire – 69% and South Dakota – 67%.  This is a positive statistic that the state leaders are keen to see continued and they are proactive in sending out ‘Click It or Ticket' patrols on the lookout both for non-use of the safety belt and for distracted drivers. Hopefully measures like this will continue to encourage Washington drivers, both young and old, to drive safely and with consideration for other vehicles and pedestrians.

The Economic and Societal Impact of Motor Vehicle Crashes

The nation pays a high price annually both in economic costs and in the emotional impact and loss of productivity of those who lose their lives, loved ones, or suffer physical injury in a car crash. In May 2014, the U.S. Department of Transportation's National Highway Traffic Safety Administration (NHTSA), published a report which outlines the enormous economic and societal impact caused by car crashes and traffic accidents each year.  Based on 2010 statistics the individual economic cost of traffic accidents to every US citizen each year is almost $900. That is a cost to the nation of $277 billion. Add to that a further $594 billion in harm from the loss of life and the pain and decreased quality of life due to injuries.

In the Event of a Car Crash

The best prevention from being involved in a car accident is to drive safely and defensively. Even so, you cannot guard against the reckless driving or lack of driving skills of others, and so you must be prepared to take quick and appropriate action in the event of a car crash.

Following vehicle collisions, it usually takes some time to determine the full impact of injuries. Your decision to contact our firm early on can help ensure your case is not prematurely settled, and that you end up being fairly compensated for the full extent of your loss.