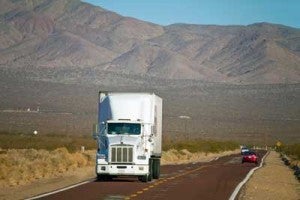 Most people appreciate the fact that the construction industry is a dangerous one in which workers are exposed to a variety of hazards during a typical working day but many do not realize that the trucking industry also has a high rate of work related illnesses, injuries and fatalities.

In Washington State, for example, 1 out of every  4,100 full-time employees in the Washington trucking industry will be fatally injured in the US each year. Nearly 4,000 people are killed and 100,000 others are injured in large truck and bus crashes.

Many truck collisions are caused by the drivers of the heavy vehicle but some are caused by drivers of ordinary cars not driving safely and responsibly around large vehicles. Despite the obvious – that the occupants of a car are going to come off far worse in a truck/car collision – some car drivers seem unable to resist aggressive and reckless maneuvers in order to pass large vehicles on the road.

Aggressive driving of all vehicles accounts for approximately 1,500 deaths each year and thousands of injuries.  The AAA Foundation for Traffic Safety finds that aggressive driving usually includes the following behavior:

• Speeding or Driving Too Fast for Conditions.
• Tailgating or Following Too Closely.
• Improper/Unsafe Passing, often without signaling.
• Improper /Unsafe Lane Usage, cutting off another vehicle.
• Obscene gestures and/or use of the horn out of anger or frustration.

Given the sheer size and destructive power of a heavy goods vehicle, it is difficult to imagine a truck driver engaging in aggressive or reckless driving. Unfortunately the courts are full of cases involving truck versus car accidents caused by the reckless driving of a truck driver. Where commercial trucks are concerned, the American Transportation Research Institute (ATRI) has found that the likelihood of a heavy goods vehicle being involved in a crash rises significantly when its driver has a previous conviction involving any of the hazardous actions mentioned above.

In fact, the following table gives startling details on the statistical likelihood of a future crash if a commercial driver has a conviction for any of the above listed actions:

In vehicular accidents involving a semi-tractor trailer, the outcome for all involved can be catastrophic. Compared with accidents involving only family cars and passenger vehicles, trucking accidents more often result in death or devastating injury which often include disabling and complex head, brain and spinal injuries. In Wrongful death or personal injury suits brought against a trucking company it is a near certainty that the trucking company has deep pockets to fund an aggressive defense.  To counter this it is likely that there will likely be substantial costs involved in investigating the accident and conclusively proving liability as a result of a truck driver or a company's negligence and/or violations of the Federal Motor Vehicle Code.

Negligent driving is bad enough behind the wheel of a family car but when the driver of an 80,000 semi truck takes dangerous chances with the lives of other road users, the danger to us all is unimaginable.

Please find go here to find out more about Trucking Accidents in Washington and Oregon.