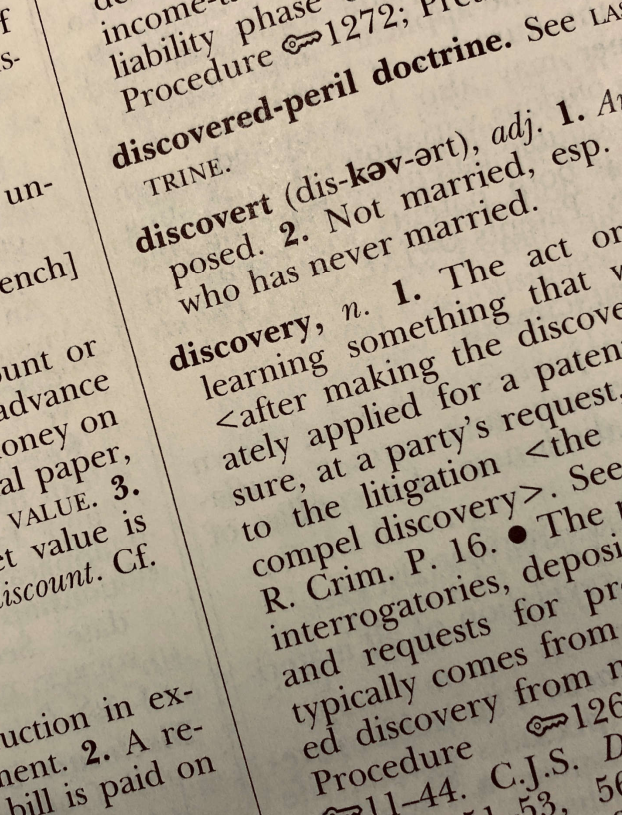 “Discovery” is just a fancy legal term that means “documents and information shared with the other side.”

The law sometimes has a way of using a single ten-dollar word when stringing together a few one-dollar words would provide more clarity and meaning. Such is the case with the word “discovery.” I frequently tell my clients that “discovery” is just a fancy legal term that means “documents and information shared with the other side.” That simple definition alone, might be sufficient to end this blog post right now without further confusion and explanation—especially for those just wanting a quick answer. For those looking for deeper understanding, Black's Law Dictionary, the legal Bible of all legalese, defines the term as follows:

discovery n. (16c) 1. The act or process of finding or learning something that was previously unknown <after making the discovery, the inventor immediately applied for a patent>. Cf. INVENTION (2). 2. Compulsory disclosure, at a party's request, of information that relates to the litigation <the plaintiff filed a motion to compel discovery>…. • The primary discovery devices are interrogatories, depositions, requests for admissions, and requests for production. Although discovery typically comes from parties, courts also allow limited discovery from nonparties. 3. The facts or documents disclosed <the new associate spent all her time reviewing discovery>. 4. The pretrial phase of a lawsuit during which depositions, interrogatories, and other forms of discovery are conducted. — discover, vb. — discoverable, adj.

To better understand the meaning of “discovery”, let's explore each of these definitions separately. The third meaning “the facts or documents disclosed”, is pretty easily understood—it's the information obtained through the process of discovery. I'll discuss that more below. The fourth meaning, references a period of time—the time period before a lawsuit when the parties are finding out the facts and circumstances of the litigation.

The biggest meaning, and perhaps the most applicable to those non-legal professionals seeking to understand what the law means when using the word “discovery”, is the second definition. The bulk of this post will address this meaning of “discovery.”

Through discovery, a party gets to learn information from the other party about the facts, opinions, and all other types of information that might be related to the litigation. The law affords several different methods to obtain this information. Black's Law Dictionary identifies these as “interrogatories, depositions, requests for admissions, and requests for production.

Interrogatories – A party may send a written question to another party and request that the party answer that question. Such a request is called an Interrogatory. Interrogatories are permitted in Washington state and all federal courts. Oregon state courts do not permit the use of interrogatories. Though interrogatories can cover almost any topic common interrogatory questions in a personal injury case ask a party to describe the collision, to identify all medical providers with whom the party treated, or to list all witnesses who may be called upon to testify at trial.

Depositions – A party can schedule a meeting in which it can have an in-person conversation to ask questions, and get answers, of the other party. These meetings are called depositions. Depositions are permitted in all state and federal courts in the United States. Deposition topics can be varied and vast. Typical areas of inquiry in a personal injury case include the person's background (educational and personal), the collision facts, and the treatment the person received.

Requests for Admission – One party can force the other party to either admit or deny a stated conclusion. If a party denies the stated conclusion, and the party who asked that it be admitted later proves the conclusion at trial, the requesting party may be entitled to the fees and costs associated with proving the conclusion. It follows, that most Requests for Admission deal with facts which are not, or seemingly should not, be in dispute. They are permitted in both all state and federal courts. We typically send Requests for Admission to the person who caused a wreck asking them to admit that the medical bills incurred by our clients are reasonable and were incurred because of the injuries sustained in the collision.

Requests for Production – In all state and federal courts in Washington and Oregon, a party can request the other party produce documents and other things related to the lawsuit. Typically, such requests include requests that an injured party produce photographs of the collision, medical bills, and other treatment records.