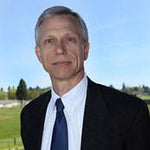 Founding Partner, along with Craig Schauermann