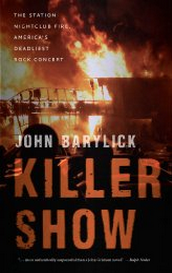 This book, written by an attorney, details the tragic nightclub fire that killed 100 people in 2003, and the companies and individuals held responsible

While we often deal with personal injury cases caused by another person, and some wrongful death cases involving a company workplace problem, there are also a number of cases involving large corporations that can affect our clients. On occasion, more than one company bears responsibility for an incident.

Sometimes there are even large cases that extend across state lines. In the 1970's, approximately 49 million Americans had water supplies that contain arsenic, radioactive substances, and coliform bacteria. Trial attorneys were able to hold Velsicol Corp. accountable for contamination of drinking water in Tennessee.  The company was found to have dumped 300,000 barrels of chemical waste improperly.

And statistics show that US Corporations produce 25 billion pounds of hazardous wastes each year.  One case that comes to mind is the infamous “Love Canal” incident where Hooker Chemical Co. dumped 20,000 tons of chemical waste in an unlined canal near Niagara Falls, then sold the land to the local school board.  The company did disclose the waste in the deed, but later both the company and the school board and government bodies at the state and federal level were held accountable for cases of birth defects, miscarriages and diseases that occurred after the land was developed and residents began suffering.

Closer to home, there has been a controversy in our community about shipments of Oil through the Port of Vancouver.  Residents are rightfully concerned about environmental impact.  Those concerns include potential oil spills, fiery train derailments, train-traffic impacts on neighborhoods, detrimental impacts to the waterfront redevelopment plan and greenhouse gas emissions. Four of Seven Vancouver City Council Members don't like the plan, the Columbian has reported. Still some in our area in favor of the $110 million project proposed by Tesoro Corp. and Savage Companies, for economic reasons including new jobs.  We believe safety should be a primary consideration in whatever is decided.

Sometimes a number of individuals and corporations become culpable in a tragedy leading to injuries and wrongful deaths.  One well known case is the Station Nightclub Fire which happened in a Rhode Island club in 2003.  The fire occurred when the road manager for a band lit off pyrotechnics which ignited sound dampening foam creating a quickly moving blaze that lead to tragic burns within about 90 seconds.  100 people were killed and many more severely injured.  Wrongful death and personal injury litigation resulted in over $175 million being paid in civil settlements from companies including sound foam manufacturers, the local beer distributor, and a radio station that promoted beer drinking, a television station, JBL Speakers, Home Depot and the town of West Warwick, Rhode Island.  The book, “Killer Show” details how these companies and some individuals all made poor choices that led to fiery result.  Author John Barylick, an attorney, makes his opinion clear that the choices were all motivated by greed.

While we read of these tragedies and related culpability with the same disgust and consternation as the general public, we are happy that our work in the civil justice system allows us to have an impact with both remedies for our clients, and deter future harmful conduct that often can lead to industry reforms.